Posts Tagged With ‘ Remember and Honor Our Veterans ’ 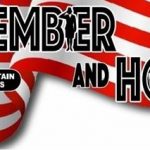 Everybody has a unique story, sometimes they are just waiting for someone to ask it.  We collected all the facts and figures, but not nearly enough of the personal stories…stories that add a powerful dimension to the facts and figures.” Brad Hoopes loves history, especially the World War II era. A few years ago, he learned that the Library of Congress collects the stories of veterans.  He decided to start interviewing veterans locally. He bought a video camera and just started doing it.  He has interviewed more than 500 Northern Colorado veterans of various conflicts. He focuses on the... Read More

Tagged: eventsfort collinsonlinepresentationRemember and Honor Our VeteransThings To Do
OnFortCollins.com is a locally-owned and operated directory and information guide for Fort Collins Colorado
Discover the best of Fort Collins shopping, restaurants, night life, breweries, events, business, outdoors, fun, local life, real estate, transportation, jobs, and schools.
Looking for what to do in Fort Collins? OnFortCollins.com has columnists, and bloggers to keep you up to date on the best of Fort Collins, Colorado.