How to Celebrate the Fourth Safely 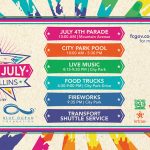 We’ve reached that time of year where it’s socially acceptable to want to blow things up and light things on fire. I don’t know about you, but plenty of friends have been asking what there really is to do for the Fourth of July this year. Well. There’s a lot. The City of Fort Collins and its sponsor Blue Ocean Foundation have planned a whole day just for you. Starting at 10 AM, there will be an Independence Day Parade that travels along Mountain Avenue from Meldrum Street to Jackson Avenue. Make sure you get there with enough time to park so you and the family can see the... Read More