Home » Non-Profit » Beacons in the Darkness

Beacons in the Darkness 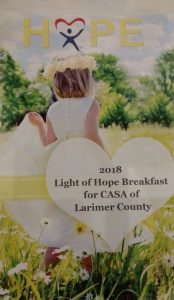 The Light of Hope Breakfast for CASA of Larimer County

When you think about Fort Collins, some of the first things that probably spring to mind are college and beer. Perhaps your first thought wouldn’t be that there was a Light of Hope Breakfast for CASA of Larimer County on Wednesday, April 4th.

Perhaps you had not even heard of CASA before this post, which is an all-too-common occurrence. For a brief introduction, CASA stands for “Court Appointed Special Advocates,” a group of volunteers that, according to CASA of Larimer County’s mission, act as a “voice in court for abused and neglected children and a safe place in the community for conflict-free interactions.” CASA, alongside the better-known Harmony House, works to help children as they navigate a messy, and sometimes, uncertain court system.

This particular event is an annual event and the largest fundraising opportunity of the year for CASA, almost always helping to kick off April, or National Child Abuse Awareness Month. It started about 16 years ago and has amassed over 300 participants as of this year. Yet, for each of those 300 people interested in the event, there are equally as many children who are not given access to a CASA of their own, due to limited resources. The idea behind the event was to raise awareness of CASA and bring in donations to help these 300 children get a CASA.

Another important component of this event was that all of the many volunteers, donors and partner businesses were given thanks and recognition for all they have done to help in the past. These donors and businesses themselves were given as their own beacons of hope, not just with each other, but with the community at large.

The breakfast showcased some of the biggest values you can find in Fort Collins: community and optimism.

Faces and names were put to these values, from Renee Doak (CASA’s board chair) to Annette Hoyt (Volunteer Recruiter and Training Coordinator) to Theresa Cole and Megan Graham (staff members at CASA and Harmony House, respectively). They are, by no means, an extensive list of people involved with this event, but rather faces to show that the world has a bright future.

According to Megan Graham, Harmony House case manager, that is exactly why she loves her job. Of the breakfast event, Graham said,

“I’d love to get across awareness for CASA of Larimer County to help achieve are mission. We’re here for the children. I just love that we have the ability to change a life. I love explaining that to children who come in to Harmony House.”

This same point was driven home by this year’s keynote speaker, Courtney Walter. Courtney needed a CASA herself as a child. The strength and confidence Courtney attributed to having a CASA through those turbulent years shone brightly as she explained just how much impact the program and the individual had on her. She emphasized that her CASA helped her break the chain.

The Light of Hope Breakfast predominantly serves as a way of fundraising in the community, as well as showcasing all of the wonderful individuals who can change children’s lives. If you wish to get involved, please visit casalarimer.com, or if you would like to attend more CASA of Larimer County events this month, http://casalarimer.com/events-2/annual/

Crystal Angevine
Crystal Angevine is a CSU Alum, who dreams big and works hard. She loves being in the outdoors, lives for her family, and tries hard to be the change she wishes to see in the world. On any given Saturday, she might be found knitting, doing other handcrafted arts, or playing video games. She grew up in Northern Colorado, but still loves exploring Fort Collins and the surrounding areas. What better way to do that than by telling the world about the plethora of events dear old FoCo has to offer?
Tagged: CASA of Larimer Countychildrencommunityeventslight of hopevalues
OnFortCollins.com is a locally-owned and operated directory and information guide for Fort Collins Colorado
Discover the best of Fort Collins shopping, restaurants, night life, breweries, events, business, outdoors, fun, local life, real estate, transportation, jobs, and schools.
Looking for what to do in Fort Collins? OnFortCollins.com has columnists, and bloggers to keep you up to date on the best of Fort Collins, Colorado.