Home » Movies » The Glass Between Their Love

The Glass Between Their Love

On July 6, 2016, Philando Castile died tragically and pointlessly. Officer Jeronimo Yanez pulled Castile over during a traffic stop. Later, Yanez claimed Castile was pulled over because he looked like the suspect in a robbery. In the car with Castile was his girlfriend, Diamond Reynolds. Her four-year-old daughter was in the back seat. 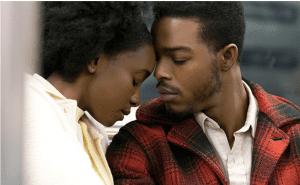 As Yanez asked Castile to produce his license and insurance, Castile informed the police officer that he had a licensed firearm in his possession. At this point, Officer Yanez panicked. He raised his voice, unholstered his firearm, and fired at Philando Castile seven times at nearly point-blank range. Five rounds hit Castile. Two of them pierced his heart.

Why did this happen? We have yet another situation where a completely innocent black man was racially profiled. We have yet another situation where a person who had no business being in law enforcement escalated an encounter needlessly, killed a man for no reason, and then lied about it.* The pointless death of Philando Castile was perhaps not so unexpected, considering he was unlucky enough to live in a country dedicated to the persecution of people of color.

Growing up in Harlem, the writer James Baldwin was acutely aware of this. He was a black man, a gay man, and said, “To be a Negro in this country and to be relatively conscious is to be in a rage almost all the time.” As a keen observer of people, Baldwin also knew that love was a force stronger than hate, and it had a peculiar means of surviving in the harshest conditions. He wrote a novel about love surviving, and Barry Jenkins has adapted it in his new film If Beale Street Could Talk.

Tish (KiKi Layne) is 19. Fonny (Stephan James) is 22. They have known each other since childhood, and their bond is strong and deep. Fonny is a woodcutter, a very skilled one, and they realized they loved each other when Fonny presented an immaculate wood sculpture to Sharon (Regina King), Tish’s mother.

As so often happens, one thing leads to another. Tish gets pregnant, and she has to deliver the news of Fonny’s impending fatherhood through a thick pane of industrial-strength glass. Victoria (Emily Rios) has been raped. Did Fonny do it? Certainly not, and he has an alibi that places him across the city to prove it. But the racist Officer Bell (Ed Skrein) has an ax to grind with Fonny, and he coerces an identification from Victoria.

Tish needs to tell her family, about the pregnancy, about Fonny’s incarceration, about all of it. Watch the beginning of this scene where Tish tells her mother she’s expecting. She calls to Sharon. Regina King says the line, “Yes, baby?” in response. It’s an astounding piece of acting in the space of just a few seconds. A tiny and perfectly timed pause, then the line delivery itself suggests that Sharon already knew what her daughter is preparing to tell her.

So a family meeting is called to share the news. Joseph (Colman Domingo) is Tish’s father, and his surprise quickly turns to delight. Tish’s fiery sister Ernestine (Teyonah Parris) is equally pleased. Mrs. Hunt (Aunjanue Ellis) is Fonny’s mother, and she’s considerably less pleased. Obnoxiously religious, she’s convinced that Tish’s wicked immorality has destroyed her son’s soul. This is not the first problem Tish has to deal with, and all the while, she is separated from the love of her life by the glass.

If you haven’t seen the trailer for If Beale Street Could Talk, or you haven’t read any of Baldwin’s work,** let me adjust your expectations ahead of time. This film isn’t a thriller about a woman trying to save her unjustly accused love, or even a conventional love story. It’s more of a romantic tragedy, about a world bound and determined to destroy two people, and the love they have for their families and each other.

Near the end of 2016, Barry Jenkins quietly blew audiences’ minds with his film Moonlight. Along with Beale Street, Jenkins has proved himself a filmmaker of considerable skill and power. He’s less interested in narrative (which we’ll talk more about momentarily), but more about creating a series of vignettes and an overall mood. You can feel a little of Douglas Sirk’s lush romanticism, and a little of the tragic yearning of Wong Kar-wai’s In the Mood for Love.

Jenkins wrote the screenplay, and he had a considerable challenge ahead of him in adapting Baldwin’s novel. The book is anything but straightforward, slipping back and forth through time. While the transitions in the script are a little abrupt occasionally, Jenkins uses the power of the emotion to sweep us along. We’re watching Tish and Fonny fall in love, then sustain their bond over the long haul and through each revelation they experience.

This film wouldn’t work without the sweet chemistry between KiKi Layne and Stephan James. They occasionally recede into the background, and we have moments to focus on the strong supporting cast. Regina King gets some meaty character moments, particularly an extended scene where her Sharon travels to Puerto Rico to convince the accuser Victoria to exonerate her son. Brian Tyree Henry and Dave Franco also have moments that are brief but indelible. In the end, things always circle back to Layne’s Tish and James’ Fonny. They have wordless moments where they’re gazing into each other’s eyes, or into the camera itself, and the emotional strength of their performances is so strong that dialogue would only get in the way.

On the drive home from watching If Beale Street Could Talk, I found myself thinking about Philando Castile, the injustices that persist, and our unwillingness to be decent. But I’m reminded that Diamond Reynolds recorded the event on her phone, and the video created a maelstrom on social media.*** Technological innovations connect us, create signal boosts, and what was once forgotten is now dragged into the light. Blatant racism is called out, and formerly untouchable people now face the consequences.****

While Baldwin said, “People are trapped in history, and history is trapped in them,” perhaps an interconnectedness fueled by love and the internet reaching beyond geographical barriers will allow for a new future. One predicated on basic decency in which the events of Beale Street and the murder of people like Castile won’t be repeated.

*Yanez testified that he feared for his life for two reasons. The first was that a small amount of marijuana was found in a mason jar. Yanez thought anyone with weed in the proximity of a small child was capable of anything. Second, Yanez claimed he saw a gun in Castile’s hand. Castile’s gun was found in his pocket. While Yanez was fired from the police department, he was acquitted of manslaughter and reckless discharge of a firearm.

**But you should! Baldwin was a shockingly talented writer, evocative and perceptive.

***James Baldwin would have absolutely crushed it on Twitter.

****South Carolina resident Stephanie Sebby-Strempel became famous due to an online video, in which she yelled racial slurs and hit a black teen at a community swimming pool. You probably know her better by her nickname of “Pool Patrol Paula.” That stunt got her a $1,000 fine and a lost job.

Tim Brennan
Tim has been alarmingly enthusiastic about movies ever since childhood. He grew up in Boulder and, foolishly, left Colorado to study Communications in Washington State. Making matters worse, he moved to Connecticut after meeting his too-good-for-him wife. Drawn by the Rockies and a mild climate, he triumphantly returned and settled down back in Boulder County. He's written numerous screenplays, loves hiking, and embarrassed himself in front of Samuel L. Jackson. True story.
Tagged: aunjanue ellisbarry jenkinscolman domingoed skreinemily riosif beale street could talkkiki layneregina kingstephan jamesteyonah parris
OnFortCollins.com is a locally-owned and operated directory and information guide for Fort Collins Colorado
Discover the best of Fort Collins shopping, restaurants, night life, breweries, events, business, outdoors, fun, local life, real estate, transportation, jobs, and schools.
Looking for what to do in Fort Collins? OnFortCollins.com has columnists, and bloggers to keep you up to date on the best of Fort Collins, Colorado.