Archive for the ‘ News ’ Category

Where to Watch Fireworks in Fort Collins 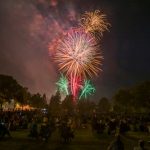 Wondering what your best view will be of the fireworks in Fort Collins this year? We’ve pulled together a list of our favorite spots. 1. City Park Thu Jul 04 2019 at 9:35 pm City Park, 1500 W. Mulberry St. Get there early, because City Park gets crowded for the annual fireworks show. Watchers are encouraged to bring their own blankets or chairs to spread out and watch the show. The Fort Collins Symphony will also be playing shortly before the fireworks begin.   2. Stars & Stripes Open at City Park Nine If you’re looking to do something a little less conventional on the 4th... Read More

Bear Runs Through Marathon in Leadville 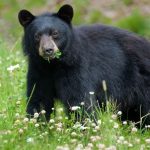 Runners at Leadville Trail Marathon in Colorado were met with a stunning surprise as a bear crossed their paths about midway through the race. The bear ran straight through the middle of the path that the runners were on, causing everyone to stop what they were doing to watch it meander through. Stephen Peterson of Colorado Springs told Runners World, “We let the bear do what it was going to do, and it found a gap in the runners to cross and then took off into the brush. Everyone just looked at each other like, ‘Did that really just happen?’ It was so casual. That was what was funny... Read More 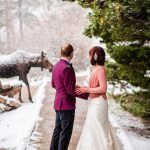 A couple from Illinois visited Rocky Mountain National Park this week to get married and were startled when a moose came into view in their snowy May background. The couple made several attempts to take pictures and say their vows, but the stubborn guest continued to meander closer and closer. The couple said that they had never seen a moose before, and their photographer noted that the couple was terrified; she kept trying to get them to pay attention to their pictures, but they were in awe of the wildlife. The surprise guest and late spring snowstorm led to some stunning wedding pictures for... Read More

Tagged: ColoradomaymoosephotographyRocky Mountain National Parksnowvisitorswedding
OnFortCollins.com is a locally-owned and operated directory and information guide for Fort Collins Colorado
Discover the best of Fort Collins shopping, restaurants, night life, breweries, events, business, outdoors, fun, local life, real estate, transportation, jobs, and schools.
Looking for what to do in Fort Collins? OnFortCollins.com has columnists, and bloggers to keep you up to date on the best of Fort Collins, Colorado.