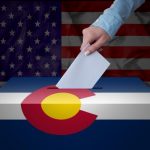 A new federal law proposition entitled “Next Generation Votes” hopes to follow in Colorado’s footsteps to increase voter turnout of young people, a notoriously underrepresented group in elections. The law would allow 16-year-olds to pre-register to vote while getting their license. A law for this had been passed in 2013 in Colorado. The Colorado Secretary of State’s Office says nearly 156,000 16-and-17-year-olds in Colorado have pre-registered to vote since the law took effect. This in turn has made it so 60% of young people in Colorado voted in last year’s election compared to... Read More