iGen More Likely Than Other Generations To Be Depressed 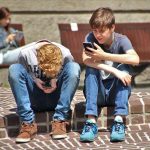 A 2015 survey found that two out of three U.S. teens owned an iPhone. For this reason, the generation of kids born after 1995 is called iGen, coined by author Jean Twenge, author of a book on the subject. According to the Pew Research Center, smart phone ownership crossed the 50 percent threshold in late 2012 – right when teen depression and suicide began to increase. These increases in depression, suicide attempts and suicide appeared among teens from every background, across all races and ethnicities, and in every region of the country. The bottom line:  iGen teens are much more likely to... Read More