Give These Women a Better Movie! 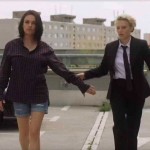 As human beings, we’re all about categorization. That’s particularly true when it comes to how we view actors. Denzel Washington does righteousness. Bill Murray does sarcasm. Tom Cruise does focus. While we say we want something new from our film actors, what we often want is something that’s the same that feels new. It’s not fair, but there it is. So what happens when an actor isn’t easily categorized? Exhibit A is Mila Kunis. She’s been working steadily for several years, and while she’s mostly done comedy, she has an equal gift for drama. Her best films are probably Ted and Black... Read More

Tagged: david isersonivanna sakhnojane curtinjustin therouxkate mckinnonmila kunispaul reisersam heughansusanna fogelthe spy who dumped me
OnFortCollins.com is a locally-owned and operated directory and information guide for Fort Collins Colorado
Discover the best of Fort Collins shopping, restaurants, night life, breweries, events, business, outdoors, fun, local life, real estate, transportation, jobs, and schools.
Looking for what to do in Fort Collins? OnFortCollins.com has columnists, and bloggers to keep you up to date on the best of Fort Collins, Colorado.