The Buffs Make it to a Bol Game 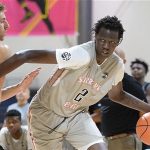 The Colorado football team may have disappointed with their late season collapse, but that doesn’t have to mean the absence of a Bol game.  A game that features University of Oregon’s Freshman sensation, Bol Bol that is.  While the basketball game doesn’t take place until February 2nd, the hype surrounding Bol is turning into must-see-tv. Listed at 7’3, Bol is averaging 21 points, 10 rebounds, and 3 blocks a game in what most assume will be a one-and-done season at Oregon.  But if you’re asking whether Bol will be a “project” at the next level, it’s time for a history lesson. Bol’s... Read More

Tagged: Bol BolColorado BuffaloesManute BolMcKinley WrightNCAA basketballNike.Oregon DucksPac 12Tad Boyle
OnFortCollins.com is a locally-owned and operated directory and information guide for Fort Collins Colorado
Discover the best of Fort Collins shopping, restaurants, night life, breweries, events, business, outdoors, fun, local life, real estate, transportation, jobs, and schools.
Looking for what to do in Fort Collins? OnFortCollins.com has columnists, and bloggers to keep you up to date on the best of Fort Collins, Colorado.