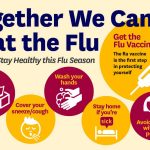 It’s impossible to know for certain how a flu season will be, but the flu season in the Southern Hemisphere may be an indicator for how bad the flu will be in the Northern Hemisphere. In Australia, where winter and flu season are wrapping up, the flu started early in the year and a particularly virulent flu strain, H3N2, dominated. In the US, a 4-year-old child has already died from the flu. A death so early in the season can also indicate a particularly nasty flu that may be worse than usual. Last year’s flu season ran from Oct. 1, 2018, to May 4. Doctors recommend getting the flu... Read More