Boss Level is streaming on Hulu

In the world of Hollywood, it can take time for a genre to emerge. That’s mostly due to the overwhelming cowardice lurking throughout the entertainment industry. If you have a novel idea for a movie, say, an action flick where the hero is scared and tired, or a series of films that create an interconnected cinematic universe, the vast number of executives will pass on it before you can finish your first sentence.

It took a minute for time loop movies to catch on. Groundhog Day wasn’t the first. As best as I can figure, the first time loop movie was The Girl Who Leapt Through Time, a 1983 Japanese film about…well, you know. Ten years later, Groundhog Day became one of the highest-grossing films of the year and earned generally positive notices from critics.

You’d think there would be a flood of movies about people repeating the same day. There were a few, such as the underloved Retroactive* and the seemingly forgotten Run Lola Run. But the time loop subgenre didn’t really take hold, and my gut tells me it’s probably because they were viewed as either too weird or too much of a risk.

Then Edge of Tomorrow happened in 2014. It was a modest critical and financial success, despite the implosion of Tom Cruise’s reputation. Doctor Strange futzed around with a time loop in 2016, and both films cemented the idea that you could merge sci-fi with a protagonist stuck in a repeating day. Could you do the same with action? It turns out you can! While Boss Level feels a little derivative and a teensy bit dumb, it gets points for stretching the genre in new directions.

Think of your standard bad day. The alarm doesn’t go off. The coffee maker is broken. Your dog took a Jurassic-sized dump in the living room. Ex-Special Forces operative Roy Pulver (Frank Grillo) dreams of boring bad days like this. His standard day looks something like this:

Sometimes his timing is off and the dude with the machete whacks him. Other times he’s nailed by the gunner. Roy has been at this a while. It’s been May 9

for about four months, and Roy is able to (mostly) predict what happens and survive. Up to a point, and in the 47 previous attempts, Roy has found himself unfortunately deceased by the time the clock strikes noon.

Attempt 48 is different. Roy attempts to call Jemma (Naomi Watts), his beloved ex. Answering the phone instead is Colonel Clive Ventor (Mel Gibson). He’s Jemma’s boss, the head of a shadowy defense contractor, and an enthusiastic smoker of cigars. The good Colonel offhandedly mentions that Jemma has died in an accident. As you might expect, this strikes Roy as suspicious. As you also might expect, he’s slaughtered before he can do anything about it.

We also learn that on May 8, the day before the loop, Roy visits Jemma’s lab. He’s under the impression the place is hiring for security, yet Jemma is acting weird. That strange behavior doesn’t stop them from arguing over Roy’s alcoholism, irresponsibility, and the fact that their son Joe (Rio Grillo) doesn’t know Roy is his pappy. Will Roy have to kill his way to the truth? Will he realize, nearly too late, that family is the most important thing ever? Will he do all that while battling a motley crew of murderers, bounty hunters, desperadoes, mugs, pugs, thugs, and possibly Methodists?**

An awful lot works with Boss Level, and director Joe Carnahan is one of the main reasons why. Carnahan is one of those filmmakers who’s never quite gotten his due, despite having made rock-solid films like Narc and The Grey.*** It’s a shame, since he directs with energy and creativity to spare. At a hair over 90 minutes, Carnahan’s pacing is rocket fueled. Despite the speed, he never sacrifices coherence, and his action scenes are clean and propulsive.

On the one hand, I like knowing that good things occasionally happen in Hollywood. Screenwriters Eddie Borey and Chris Borey originally wrote the script way back in 2012. Carnahan believed in the project and jumped in for rewrites, and nearly ten years later, their combined vision is in front of our eyeballs. On the other hand, the script is occasionally uneven. The worst aspect is a voiceover from Roy running throughout the film. A good script should show rather than tell, and the V.O. does nothing but tell. One more rewrite removing it and making some more creative storytelling choices would have fixed the problem. Additionally, Mel Gibson’s villain felt very underwritten. There’s a moment where an interesting motivation for him is introduced, and it’s immediately undercut.

A big reason you’re likely to enjoy this film is the go for broke performance by Frank Grillo. Yes, his Roy is another in a long line of dudes with a particular set of skills. You’d expect him to slaughter, maul, mangle, fold, and spindle legions of goons and Grillo whips seventeen kinds of ass throughout the film. Unlike other action-y types, he seems to be having a pretty good time despite his existential crisis. Grillo is funny, likable, and can handle the grounded dramatic moments as well as he can handle getting blown up.

A big reason you’re not likely to enjoy the film is the Mel Gibson-sized elephant in the room known as Mel Gibson. Before his infamous fall, Gibson was one of the biggest stars ever. Like it or not, he seems to be on a comeback. He comes bearing baggage. Frankly, it’s tough for me to watch him without thinking of all that baggage.**** I wonder if he can’t feel its weight himself. As the evil Colonel Ventor, Gibson isn’t at full Bruce Willis levels of indifference. He’s close, though, and only felt engaged during a fistfight with Grillo’s Roy. That’s a shame since Gibson can be an absolutely electric performer when he’s fully engaged.

Boss Level doesn’t reinvent the time loop genre. It doesn’t have to. Sure, it’s Groundhog Day With Guns, which is fine! I’m surprised that hasn’t been done sooner. The film sets up the rules and hurls us into the mayhem with a light touch. It’s a credit to its genre, and I could see viewers returning to it over, and over, and over… 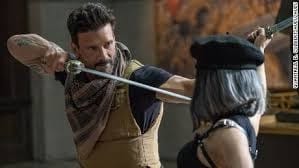 *As much as we all like to clown on James Belushi, he’s very effective playing a murderous redneck, of all things.

***If there’s one thing I’d ask of you, it’s to see The Grey. You’ll get a movie that’s a sobering examination of masculinity in the face of death, and an exciting wilderness adventure yarn.

****I could write a whole column about trying and sometimes failing to separate art from the artist.

Tim Brennan
Tim has been alarmingly enthusiastic about movies ever since childhood. He grew up in Boulder and, foolishly, left Colorado to study Communications in Washington State. Making matters worse, he moved to Connecticut after meeting his too-good-for-him wife. Drawn by the Rockies and a mild climate, he triumphantly returned and settled down back in Boulder County. He's written numerous screenplays, loves hiking, and embarrassed himself in front of Samuel L. Jackson. True story.
Tagged: HuluMovie Review
OnFortCollins.com is a locally-owned and operated directory and information guide for Fort Collins Colorado
Discover the best of Fort Collins shopping, restaurants, night life, breweries, events, business, outdoors, fun, local life, real estate, transportation, jobs, and schools.
Looking for what to do in Fort Collins? OnFortCollins.com has columnists, and bloggers to keep you up to date on the best of Fort Collins, Colorado.