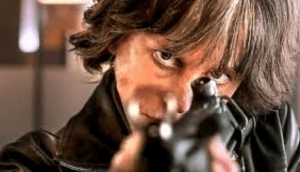 I love seeing actors take risks. Even more so, I love seeing movie stars take risks. It’s not the kind of thing that happens too often because, like criminals, movie stars tend to be a superstitious and cowardly lot. Considering that the era when a matinee icon could guarantee a huge opening for a movie is essentially dead, movie stars are increasingly faced with two choices. They can either retreat into a niche that gets increasingly smaller, or they can adapt.

Robin Williams was an early adopter of adaptation. For those of you too young to remember, Williams was a hyperactive stand-up comedian who built a film career playing unpredictable goofballs with a sweet center. Occasionally he took risks, and in 2002 he starred in One Hour Photo, as an unstable photo developer stalking a suburban family. His performance is one of the best in the history of film, and the film made back more than four times its budget.

Then there’s Meg Ryan. For a minute there in the late 1980’s to early 1990’s, she was America’s sweetheart. She has a gift for comedy and people loved her. Then the audience hated her in 1994’s When a Man Loves a Woman. Ryan’s portrayal of an alcoholic threatening to demolish her family caused people to trash the movie to their friends. Despite making $50 million at the box office, it’s an unloved film and a hiccup in a promising career.* 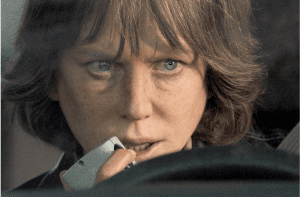 I particularly love it when Hollywood tries to pigeonhole an actor in a certain kind of role, and they take risks anyway. Nicole Kidman was first noticed due to the very good nautical thriller Dead Calm. The industry wanted her to play icy sexpots, and Kidman noped the hell away from that idea. She’s never been afraid to take risks, and true to form she’s taking another one starring in the cop thriller Destroyer.

Erin Bell (Nicole Kidman) is a walking disaster. She’s an LAPD detective just barely hanging onto her job. To say she’s a functional alcoholic would be an overstatement of her functionality, and she seems to not only sleep in her clothes but simply wear the same clothes for days on end.

But she’s still trying to do the job, and when she arrives at a lonely Los Angeles aqueduct where a body has been found, she announces she knows who the dead man is. Her colleagues take one look at her and scornfully advise her to sleep off her hangover. That’s the problem. She can’t. The body is a message from her past, and she receives another message in the form of a $100 bill stained by a dye pack.

The past has its claws deep into Erin. Years earlier, she was involved in an undercover operation with her partner Chris (Sebastian Stan). Their mission was to infiltrate a gang of lowlifes led by Silas (Toby Kebbell). Remember the crew of cool professionals led by Robert De Niro in Heat? Silas’ gang is probably closer to the reality of most criminals, that of a bunch of screwups with occasional moments of competence.

Screwups can still do massive damage, and Erin is still grappling with trauma caused by a disaster with the gang. She’s faced with an enormous drinking problem and a teenaged daughter (Jade Pettyjohn) who’s lashing out and dating a scumbag that’s too old for her. Her life is a disaster area. She has no reserves left. It doesn’t matter since she’s determined to unravel a web of drug-running, bank robbery, and murder.

I have a feeling that Destroyer isn’t going to do very well, and that’s a pity. The first strike going against it is that it’s a solid cop movie made in a time where cop movies are out of fashion. The second isn’t much more than a feeling I have. If everything else stayed the same, but the lead role was genderswapped and we had a male cop in his 50’s burned the hell out, I think audiences would show up in greater numbers. But the theater I saw it at had mostly empty seats. Again, a pity.

Director Karyn Kusama continues to claw her way out of being unfairly thrown into director jail with the 2009 failure of Jennifer’s Body.** She’s a filmmaker of intelligence and creativity, and she does good work here. I wasn’t crazy about the occasionally languid pacing and too-frequent close-ups that linger just a moment too long. However, her action scenes are fast and muscular, and she has a gift for portraying the feel of Los Angeles as a sun-baked nightmare.

Phil Hay and Matt Manfredi wrote a screenplay that skips back and forth through time and is determined to make viewers pay attention. If you pull your phone out during this movie, I promise you you’ll get lost. It sometimes feels slightly too clever by half, and there’s also a problem with some po-faced cop dialogue. Still, the characterization is mostly tight and Mandfredi and Hays have written a more ambitious script than most of the major Hollywood releases. 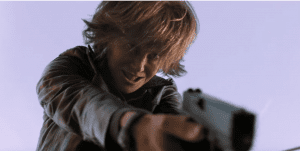 While the entire cast—including an entertainingly weaselly turn by Bradley Whitford—shows up to play, Nicole Kidman is the center of gravity here. I liked her work, and her choices are fascinating. Kidman chooses to speak in almost a complete whisper, and her movements are jerky and awkward. The filmmakers make the choice to de-glamorize her and replace her beauty with yellowed teeth, stringy hair, and splotchy skin. It made me think of Charlize Theron’s role as serial killer Aileen Wuornos in Monster. There, Theron used the makeover to fully disappear into a nightmarish character. With Kidman, I could occasionally feel her acting instead of being Erin Bell. While I’m not sure her performance entirely works, I loved Kidman’s effort and intensity. Even her failures are more interesting than other actors’ successes.

Should you see Destroyer theatrically? Honestly, I’m not sure. On the one hand, a talented cast and crew have come together to make a quality film, and that should always be celebrated. At the end of the day, though, if you strip away the performance and the time-jumping script, you have a better-than-average cop thriller.

*That’s the tragedy of Meg Ryan. She was good at comedy, perhaps a little too good. She’s also a skilled performer who did strong work in films like Courage Under Fire. In Hollywood, as men age out of being viable romantic or action leads, they can transition into character work. Trapped in a horribly sexist system, women are too often stuck playing a mother or grandmother.

**Let’s contrast that to director Jason Reitman, who had four financial failures during the last 10 years, and his punishment is to direct the upcoming Ghostbusters movie.

Tim Brennan
Tim has been alarmingly enthusiastic about movies ever since childhood. He grew up in Boulder and, foolishly, left Colorado to study Communications in Washington State. Making matters worse, he moved to Connecticut after meeting his too-good-for-him wife. Drawn by the Rockies and a mild climate, he triumphantly returned and settled down back in Boulder County. He's written numerous screenplays, loves hiking, and embarrassed himself in front of Samuel L. Jackson. True story.
Tagged: bradley whitforddestroyerkaryn kusamamatt manfredinicole kidmanphil hayscoot mcnairysebastian stantatiana maslanytoby kebbell
OnFortCollins.com is a locally-owned and operated directory and information guide for Fort Collins Colorado
Discover the best of Fort Collins shopping, restaurants, night life, breweries, events, business, outdoors, fun, local life, real estate, transportation, jobs, and schools.
Looking for what to do in Fort Collins? OnFortCollins.com has columnists, and bloggers to keep you up to date on the best of Fort Collins, Colorado.