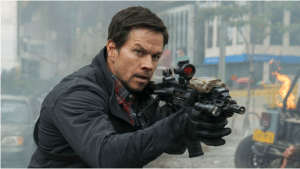 Can we take a moment to talk about Mark Wahlberg?* If you’re in the mood for some whiplash, mosey on over to the IMDB and take a look at Wahlberg’s filmography. There, you’ll see an absolutely baffling assortment of films. Some of them are very good, like Three Kings, The Departed, and Boogie Nights. Some of them, like Max Payne, Planet of the Apes, and Shooter are certified Not Good.

But what makes a Mark Wahlberg movie? What is it about the guy that’s kept him in the movie business for 24 years and counting? He has an uncouth mouth kind of way about him, as some people might say.** Wahlberg likes to play blue collar dudes, guys who have a little streak of the bad boy, but ultimately are decent. He’s not stupid by any stretch of the imagination, but he excels at playing nimrods, schmucks, and nitwits who think they’re smart. He likes to do the patented Mark Wahlberg Whisper Talk, which is as much a part of him as the Finger of Doom is to Harrison Ford.

When a new Mark Wahlberg movie is released, what’s the appropriate response? Guys…I simply don’t know. It’s like the cinematic version of Wheel of Fortune, where you spin, grit your teeth, and hope you’re not going to get screwed over by the fickle finger of Lady Luck. Wahlberg’s latest movie is Mile 22 and while I didn’t care for it, it does have its charms, sociopathic though they may be.

Remember a few weeks back when we talked about Skyscraper, and I mentioned how much I hate the cinematic trope of Five Years Earlier, when a movie starts on a mission going horribly wrong? We got one of those here, guys, so strap in. 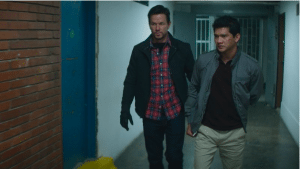 We’re introduced to James Silva (Mark Wahlberg), the leader of a shadowy strike team called Overwatch. They’re the “third option” used after diplomacy and military force fails. Alongside Silva is Alice (Lauren Cohan), who’s grappling with a nasty divorce while trying to maintain her professionalism, Douglas (Carlo Alban), who’s a guy with a gun and a beard, and Sam (Ronda Rousey), a woman with a gun and no beard. Their coordinator is Bishop (John Malkovich), who leads a team of computer experts that can basically do anything due to the magic of hacking.

Their mission, which they have already chosen to accept, is to infiltrate a Russian safe house in an American suburb. The Russians are coordinating shipments of cesium around the world, and Overwatch must stop them before the cesium can be weaponized. Things go sideways, the Russians are all killed, and the house explodes. Mondays, amirite?

Sixteen months later, the Overwatch team is still on the trail of the dirty bomb material, and they’ve made their way to Indonesia. Police officer Li Noor (Iko Uwais) surrenders himself at the U.S. Embassy and wants to make a deal. It turns out he’s been acting as an informant for Alice, and he has a fancy-shmancy computer disc. The disc contains information about the whereabouts of the last cesium shipment. It also has a computer program that will erase all the information on the disc in a few hours.

So what’s the deal? We learn that Noor is actually an Indonesian special forces operative, and corrupt government elements have slain his family. If Overwatch will put him on a plane going to the United States, Noor will give them the 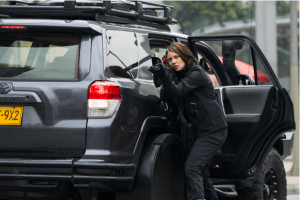 code to unlock the disc’s self-destruct program, and they can retrieve the information. It sounds easy, except that the plane is 22 miles away and the team must fight their way through legions of heavily armed bad guys.

Mile 22 is not a very good movie, but it’s not good in strange and interesting ways. This isn’t one of those movies where nobody seems to give a damn. Instead, the film makes a number of weird decisions, is oddly humorless, and occasionally has some solid action.

Peter Berg directed, and he and Wahlberg have settled into a working relationship that’s not unlike Spike Lee and Denzel Washington. This is their fourth film together, and they share a number of sensibilities. They like movies about blue-collar professionals, guys who just focus on getting the job done. Berg is a strong filmmaker, but there’s a big problem. If you’re making an action movie, you ideally want strong characters and strong set pieces together. If you can’t swing that, you at least need great action. The Raid is a good example of a movie that has paper-thin characters, but nobody cares since the action scenes are so well-choreographed, the movie whips enormous amounts of ass.

In Berg’s case here, he’s made an action film that doesn’t have iconic moments or set pieces. It just moves fast and feels like it was edited using a weed whacker. It’s a shame, because while Berg is good at depicting the chaos of violence, his film is over-edited so much that we lose a sense of geography or movement. However, the hand-to-hand combat scenes with Iko Uwais are appropriately smooth and brutal. I just wish the rest of the action shared that contained energy.

You know what else Berg and Wahlberg share? A love of nationalistic jingoism. We get plenty of that in the script by 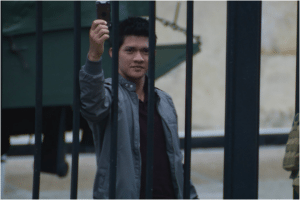 Lea Carpenter and Graham Roland, with Wahlberg spitting out nonsense lines like, “You think you know the definition of collusion?” That doesn’t equal character, however, and one of the strangest parts of the film is that virtually all of the characters are one-dimensional. With the exception of the unresolved subplot involving Alice’s divorce, we never get a sense of what these character think about this situation, or how they feel.

Maybe feelings are the problem here, because virtually every character turns in a performance that’s aggressively macho. There’s a lot of yelling, a lot of posturing, and f-bombs are dropped like enthusiastic ninth-graders. Lauren Cohan takes a break from pointing guns at zombies on The Walking Dead to point guns at regular people. She tries hard to deliver a nuanced performance, but she’s betrayed by the dopey script. Iko Uwais is a good counterpoint to everyone, and he has a serene stillness when he’s not beating the stuffing out of people around him.

Where it gets weird is with Ronda Rousey. Consider that she won a bronze Olympic medal in judo, she was a mixed-martial artist in the UFC, and also wrestles professionally in the WWE. She’s a woman of fearsome physicality, and between that and her WWE experience, you’d think she’s someone who ought to be groomed to be the next big action star, right? Nobody in Mile 22 got that particular memo, because not only does Rousey not have any distinctive action scenes, she barely has anything to do other than fire a rifle. She’s someone with a lot of potential, and she deserves a hell of a lot better than what she got here.

Where it gets profoundly weird is with Mark Wahlberg. He gives one of the most obnoxious and unlikable performances I’ve seen in a long time. Not to put too fine a point on it, but his character Silva is a gigantic dick. He throws a cupcake off a table and yells, “No birthday for you!” at one of his own team members.*** He’s pointlessly confrontational in every conversation, and it feels like he wants to waterboard everyone he talks to on general principle. A montage early on hints that he’s on the spectrum and shows he’s the survivor of trauma. That must mean at some point we’ll see his humanity and vulnerability underneath the hard and cynical shell, right? Nope, he’s just 100% a dick at all times.

Six months from now, I doubt very much that anyone will remember Mile 22 even exists. But someone will wander past a home video rack and see the movie on Blu-ray. They’ll try to access dim memories and say to themselves, “Is that the movie where Mark Wahlberg plays the guy that hates cake?” Then, they’ll remember that they need to buy more apple cider vinegar and move on, leaving Mile 22 alone and forgotten.

*This is the worst pick-up line of all time.

**”Some people” being my wife. Thanks honey!

***I laughed really hard at this. Unfortunately, I was the only one in the theater who did and I suspect it’s not meant to be funny.

Tim Brennan
Tim has been alarmingly enthusiastic about movies ever since childhood. He grew up in Boulder and, foolishly, left Colorado to study Communications in Washington State. Making matters worse, he moved to Connecticut after meeting his too-good-for-him wife. Drawn by the Rockies and a mild climate, he triumphantly returned and settled down back in Boulder County. He's written numerous screenplays, loves hiking, and embarrassed himself in front of Samuel L. Jackson. True story.
Tagged: graham rolandiko uwaisjohn malkovichlauren cohanlea carpentermark wahlbergmile 22peter bergronda rousey
OnFortCollins.com is a locally-owned and operated directory and information guide for Fort Collins Colorado
Discover the best of Fort Collins shopping, restaurants, night life, breweries, events, business, outdoors, fun, local life, real estate, transportation, jobs, and schools.
Looking for what to do in Fort Collins? OnFortCollins.com has columnists, and bloggers to keep you up to date on the best of Fort Collins, Colorado.