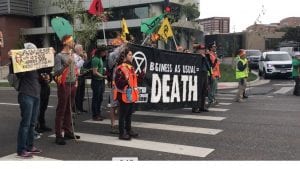 Monday morning was just the start of a week-long climate change protest that is being led by Extinction Rebellion Denver. 5 people were arrested in Monday’s protest, which saw activists blocking the intersection at Broadway and 9th.

Protesters began their peaceful march at Speer Boulevard and Bannock, where they stayed for at least one light cycle. Arrests occurred once the protestors had reached Broadway and 9th.

“We’re raising awareness to people and to the government about where we’re at in our climate emergency and ecological crisis,” said Extinction Rebellion organizer Dave Robinson. “We can’t continue with business as usual, we’re headed to our own extinction.”

Organizers said the police’s reaction went too far, as the protestor’s made it clear that they only intended to interrupt a single light cycle.

One activist, said, “Even the people who are arresting us should know that we’re doing this for them too. We believe that the planet is going to be uninhabitable by 2050 and I think that if people are aware of that fact they’ll come out.”

The group intends on having further disruptive protests throughout the week, which the police will monitor.

Kaylee Huntley
Kaylee was raised (but not *technically* born) in Colorado. She graduated from Regis University with a bachelor of arts in English. During her time at Regis she worked as a teaching assistant in a freshman classroom setting and in the writing center helping students on a variety of topics. While there, she discovered Cura Personalis, or care for the entire person, leading to her love of feminism and desire for equal rights for all. Kaylee spends her time reading, writing, and debating.
Tagged: climate changeprotests
OnFortCollins.com is a locally-owned and operated directory and information guide for Fort Collins Colorado
Discover the best of Fort Collins shopping, restaurants, night life, breweries, events, business, outdoors, fun, local life, real estate, transportation, jobs, and schools.
Looking for what to do in Fort Collins? OnFortCollins.com has columnists, and bloggers to keep you up to date on the best of Fort Collins, Colorado.