A recent survey showed that Colorado was the most desirable state to move to in the United States, with 55% of people surveyed saying that they wanted to relocate here. Colorado was followed up by Hawaii and California, with Florida, North Carolina, Washington, New York, Texas, South Carolina, Georgia and Oregon following close behind. The beautiful outdoors and subsequent activities were listed as reasons for all the top 3 states.

Mississippi, Arkansas, and Alabama were the bottom 3 states.

Some states were so undesirable that participants in the survey wouldn’t move there even if they were paid to–and it turns out some states actually are paying residents to move. 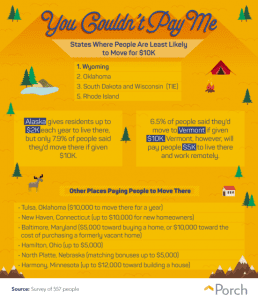 For example, Oklahoma will pay you $10,000 to reside in Tulsa for a year. The study, called “You Couldn’t Pay Me to Move…” lists Oklahoma as one of the bottom tier states, insinuating that people wouldn’t want to move there even if they were paid to. Colorado, California, and New York, on the other hand, are 3 of the most expensive states to live in. It seems Colorado is so desirable that people are more than willing to pay a premium to live here.

Kaylee Huntley
Kaylee was raised (but not *technically* born) in Colorado. She graduated from Regis University with a bachelor of arts in English. During her time at Regis she worked as a teaching assistant in a freshman classroom setting and in the writing center helping students on a variety of topics. While there, she discovered Cura Personalis, or care for the entire person, leading to her love of feminism and desire for equal rights for all. Kaylee spends her time reading, writing, and debating.
Tagged: Coloradocost of livingdesirable
OnFortCollins.com is a locally-owned and operated directory and information guide for Fort Collins Colorado
Discover the best of Fort Collins shopping, restaurants, night life, breweries, events, business, outdoors, fun, local life, real estate, transportation, jobs, and schools.
Looking for what to do in Fort Collins? OnFortCollins.com has columnists, and bloggers to keep you up to date on the best of Fort Collins, Colorado.