One of the old Hollywood legends is about the genesis of 1937’s A Star Is Born. Allegedly, it was not-so-secretly about the relationship between Barbara Stanwyck and Frank Fay. While Fay was a success on Broadway, his film career fizzled. Stanwyck became a massive film star, and Fay worked out his resentment of her through alcoholism and physical abuse. For a while, that was the template for these remakes, that of the meteoric rise of the ingènue and the corresponding fall of the has-been.

That tells us that, at the end of the day, there aren’t that many stories. In Christopher Booker’s book The Seven Basic Plots, he posits that there are — you guessed it — seven kinds of stories that we tell. They are:

The important aspect isn’t what the story is, but how the story is told. The filter provided by the artist gives us perspective, and that perspective makes the story unique – or not.

For example, Hollywood has provided a whopping five iterations of the same story, one of the vast pitfalls of fame. The first was What Price Hollywood? released way back in 1932. 1937 brought us the Fredric March-starring remake entitled A Star Is Born. Folks liked that title because it came back around in 1954 with the doomed Judy Garland. In 1976, it turned out folks really liked that title, and this time Barbra Streisand was the headliner.

Unsurprisingly, another remake struggled to get off the ground. For a minute there, it looked like Clint Eastwood was going to direct Beyoncé, but like pitiless Roman emperors, the Hollywood gods gave a thumbs down, consigning it to development hell. Then Bradley Cooper came along. He had a take on the material that was timely. More importantly, he had Lady Gaga. The end result is the 2018 version of A Star Is Born, which is both a machine engineered to win awards and a genuinely good film. 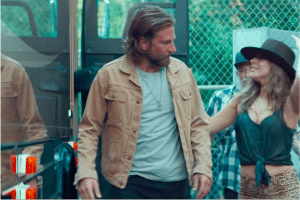 We’re introduced to rocker Jackson Mane (Bradley Cooper) performing at a sold-out concert. The crowd loves him, loves his barroom-rock and country ballads. How much does he actually love it? We get the sense that his passion for music is fading, as evidenced by the bottle of booze he slams down in his limo after the show. This is not the first time he’s self-medicated with hooch. It won’t be the last.

Clearly, Jackson needs…something. At a drag bar, he finds what he’s looking for. Ally (Lady Gaga) works by day as a server in a hoity-toity restaurant. On Friday nights, the queens at the drag bar generously let her take the stage. She’s a hell of a singer. The regulars love her. Her father Lorenzo (Andrew Dice Clay) thinks she could be huge but thinks the size of her nose will hold her back.*

Jackson stumbles into the bar, orders the first of what one presumes to be several drinks, and waits for something to happen. Ally emerges onto the stage and proceeds to absolutely decimate the crowd with her version of La Vie En Rose. Watch Cooper play this scene because as the song goes on, we see his facial expressions shift from admiration to shock at the scope of her talent to infatuation. 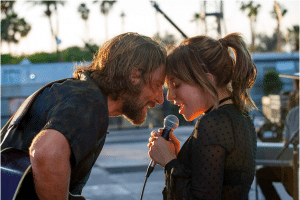 They fall in love, but their romance is nurtured by their mutual respect for their talent. He encourages her to write her own songs. He tells her, “Music is essentially twelve notes between any octave. Twelve notes and the octave repeats. It’s the same story told over and over. All any artist can offer the world is how they see those twelve notes.” As Ally begins to rocket into the heavens, Jackson starts to fall.

As someone with more talent than he’s sometimes given credit for, Bradley Cooper knows a thing or two about the machinery of stardom. Consider that, for a while there, he was viewed as the freakishly good-looking guy from The Hangover. He paid attention to the craft of filmmaking in acting showcases directed by Clint Eastwood and David O. Russell, and as the voice of the trash-talking Rocket Raccoon in Guardians of the Galaxy.

Cooper applied that knowledge here with his directorial debut. As debuts go, it’s pretty damned good. It’s common that, when actors step up to the director’s chair, they have a knack of coaxing out strong performances. Cooper is no different, and his film is overstuffed with outstanding acting. He also knows that one of the main reasons folks are showing up for this film is the music. Wisely, he always takes a moment to let us appreciate the songs, ones that we hear more than once in different contexts. Is his direction perfect? Not always, and I wasn’t crazy about the frequent occurrence of shakycam shots and an overreliance on close-ups. The first hour is the most energetic; there’s a good amount of bloat in the second act. Still, he’s offering strong and steady filmmaking that must be applauded.

This project was a labor of love for Cooper, and he worked on the script alongside Will Fetters and Eric Roth. They get an awful lot right, with an ear for natural dialogue that’s never too clever for its own good. I also appreciated how this iteration of the old tale sidesteps the resentment aspect and portrays alcoholism as a genuine disease that requires treatment. Yet the script has a couple issues as well. It seems to agree with Jackson’s take that pop music is totally disposable. A little bit more of an issue is that Ally is written somewhat inconsistently. She tells Jackson early on she won’t tolerate his drinking, then she constantly tolerates it. It doesn’t feel like her character is struggling. Instead, it feels like the script isn’t clearly showing us her struggle. 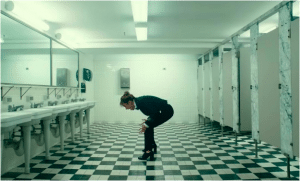 If you’re seeing this movie, and you should, it should be seen on the biggest and loudest screen possible to luxuriate in the performances. As Jackson’s older brother, Sam Elliott shows up to offer a masterclass in film acting. Most of us think of Elliott as the impressively mustachioed cowpoke in Tombstone, but here he’s mournful, restrained, and astonishing. Also, in words I thought I’d never write, Andrew Dice Clay is sweet and charming as Ally’s goofball father.

Reportedly, Lady Gaga encouraged Cooper to sing all of their numbers live. Wise Lady! Her suggestion brings an energy to the music that would have been lacking if they’d lip-synced. As the self-destructive Jackson, Cooper gives a controlled performance. He’s showing us character beats during each song, and watch how during each musical number, he quietly gets just a little sloppier, mirroring his character’s mental state.

Big surprise that Lady Gaga is the star of the show. If there’s one thing she isn’t lacking, it’s self-confidence. Initially, the idea of Gaga playing a woman who needs The Right Man to encourage her to share her talent with the world was laughable. She pulls it off, and as Ally, she’s absolutely fearless. Initially, she’s a little shy, unsure about her talent but 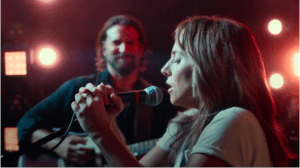 quite sure that her chance has passed her by. We see her first number with Jackson in front of a massive crowd and her reaction of Holy s–t, I can’t believe this is happening. Gaga is a force of nature who confidently shows us the evolution of her character. The woman in the last five minutes of the film is a very different person than the woman we first meet. That’s how you portray a three-dimensional character.

We’ve seen this movie before, but you know what? There’s absolutely nothing wrong with that. A Star Is Born is okay with being a 21st-century melodrama. It’s perfectly comfortable cranking up its emotions and firing them directly into your face. That comfort with genuine emotion is important, especially now. It’s the kind of thing we should be thankful for. I certainly am.

*Seriously, the size of Gaga’s nose is a recurring plot point. I found this very weird.

Tim Brennan
Tim has been alarmingly enthusiastic about movies ever since childhood. He grew up in Boulder and, foolishly, left Colorado to study Communications in Washington State. Making matters worse, he moved to Connecticut after meeting his too-good-for-him wife. Drawn by the Rockies and a mild climate, he triumphantly returned and settled down back in Boulder County. He's written numerous screenplays, loves hiking, and embarrassed himself in front of Samuel L. Jackson. True story.
Tagged: Twelve Notes - Local Movie Reviewer Explores the New Remake "A Star is Born"
OnFortCollins.com is a locally-owned and operated directory and information guide for Fort Collins Colorado
Discover the best of Fort Collins shopping, restaurants, night life, breweries, events, business, outdoors, fun, local life, real estate, transportation, jobs, and schools.
Looking for what to do in Fort Collins? OnFortCollins.com has columnists, and bloggers to keep you up to date on the best of Fort Collins, Colorado.