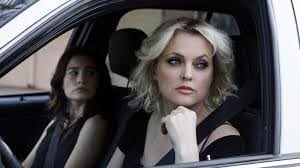 There’s a threshold that everyone crosses between childhood and adulthood. For some people, stepping across that threshold is akin to getting a boost of rocket fuel. I’ve known people who met and exceeded all expectations. They excelled at prestigious universities and entered lucrative professions. One even spent time working in the White House.* Aided by family, friends, and a considerable amount of luck, the path through their threshold likely shone brightly.

For most people, that threshold is covered in fog. You look across it and catch shadowy glimpses of possibilities. Years spent grappling with sexuality. A chance at college and movement up the ladder. A string of useless exes and a baby you were ill-equipped to care for. The only certainty is uncertainty, and the threshold is always getting closer. Some people step confidently across. Most of us lurch across gracelessly, praying we don’t fall.

Later on, things level out, and we look back at the threshold with a mixture of nostalgia and nausea. The right coming of age story can conjure those feelings. It can portray its young characters accurately and simultaneously show us who they’re likely to become. Stand By Me is one of the best examples of these films. The new release Low Low gives that classic a run for its money.

Vancouver, Washington is nobody’s idea of paradise. You could do a hell of a lot worse, but you could also do a hell of a lot better. For Candace (Montana Roesch), otherwise known as Cherry, she’s two days away from putting Vancouver in her rearview mirror and attending Evergreen College. Before she leaves, she’ll need to wrap things up with her sweet boyfriend Memo (Adam Elshar). More importantly, she’ll need to say goodbye to some, if not all of her friends.

Ryan (Ali Richey) might join her, but that chance hangs by the thinnest of threads. She’s got a brain in her head, but her home life is a disaster. She lives with her mother Sylvia (Elaine Hendrix), a woman fueled by a dangerous combination of alcohol, resentment, and a parade of bonehead boyfriends. Is it any surprise she’s acting out? Nobody believes in her potential, except for Dr. Ellison (Moniqua Plante), a caring teacher at her community college. If Ryan can nail an exam, Dr. Ellison will give her a letter of recommendation that unlocks a scholarship to Evergreen. 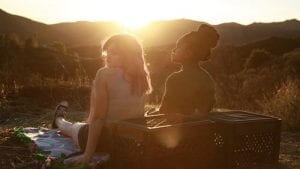 While Cherry and Ryan have something like a future, Willy (Alexis Raich) is all about living in the present. Willy has the forward-thinking capabilities of a fruit fly. She’s the kind of person who wakes up when she’s 35 with a couple of unplanned kids, a useless guy in her life, a go-nowhere job, and no clue how it all happened. There’s also Lana (Kacie Rogers), a perceptive girl so sharp she deserves to be recruited by the CIA. Unfortunately, she desperately wants to come out, and we get the sense that there aren’t many people in her life to hug her and tell her it’s okay.

With two days before the foursome splits apart, there’s a lot going on. Willy may have had unprotected sex with the boyfriend of unstable bully Tanya (Savannah Stehlin). That action spurs a frantic hunt for the morning-after pill and instigates a savage ass-kicking. The girls try a variety of drugs, brazenly steal beer, and take their first tentative steps toward the rest of their lives.

The characters in Low Low aren’t bad people—far from it. They occupy a twilight area between abject poverty and semi-comfortable middle-class existence. By and large, they’re ignored, forgotten, and rarely receive the social and financial advantages that a kid from Boulder, Colorado blithely enjoys.

They’re also the kind of characters rarely seen on-screen these days, and director Nick Richey is to be commended for that. He’s made a film that’s unflinchingly realistic about the likely options these girls have available to them, and the moments of hope that can keep them moving forward. The jittery score by Heavy Young Heathens, the natural cinematography by Pascal Combes-Knoke, and Richey’s honest direction create a feeling of propulsive energy. 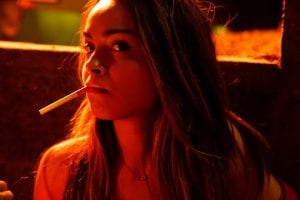 As the screenwriter, Richey creates something of a rarity. For his main characters, he writes four distinctive characters, shows us the various group dynamics, and makes us believe they are really friends. If you’re a parent watching this film, get ready for a gutshot of anxiety as the girls encounter a number of challenges that feel uncomfortably realistic. They’re surrounded by booze, drugs, sexual objectification, a murky future, and glimmers of hope.

One of the toughest kinds of characters for an actor to portray is a normal person. All of the leads deliver natural and genuine performances, but I was particularly impressed with Ali Richey as Ryan. As the film progresses, we see a protective shell hardening over her. Watch the scene in the school gym where Cherry gives Ryan a pep talk. Ali Richey says nothing, but we see that shell slowly opening as she exposes her vulnerability. Actors twice her age couldn’t pull that one off.

Talented direction, impressive acting, and a perceptive screenplay make Low Low a gritty gem of a film. It’s playing in select theaters and streaming platforms, and trust me when I tell you that it’s worth seeking out.

*For clarification, not working for the current occupant of the White House.

Tim Brennan
Tim has been alarmingly enthusiastic about movies ever since childhood. He grew up in Boulder and, foolishly, left Colorado to study Communications in Washington State. Making matters worse, he moved to Connecticut after meeting his too-good-for-him wife. Drawn by the Rockies and a mild climate, he triumphantly returned and settled down back in Boulder County. He's written numerous screenplays, loves hiking, and embarrassed himself in front of Samuel L. Jackson. True story.
Tagged: adam elsharalexis raichali richeyelaine hendrixkacie rogerslow lowmoniqua plantemontana roeschnick richey
OnFortCollins.com is a locally-owned and operated directory and information guide for Fort Collins Colorado
Discover the best of Fort Collins shopping, restaurants, night life, breweries, events, business, outdoors, fun, local life, real estate, transportation, jobs, and schools.
Looking for what to do in Fort Collins? OnFortCollins.com has columnists, and bloggers to keep you up to date on the best of Fort Collins, Colorado.