Home » Articles » Movies » The Review With the Unnecessarily Long Title

The Review With the Unnecessarily Long Title

There’s this friend of mine — we’ll call her Polly — who absolutely despises horror movies. Can’t handle them. Not only does she see no artistic merit to them whatsoever, but she also doesn’t enjoy the cinematic experience of being scared. Those intense feelings toward horror cinema have been transferred to Polly’s oldest son. Not only does she refuse to let him watch scary movies, she won’t let him view content with even a hint of the macabre.

Let’s be clear, I’m not suggesting she should gather the family around the TV for a double feature of The Exorcist and The Shining. What I am suggesting is that she be realistic. As surely as night follows day, kids will become curious about horror. Those films are a chance to vicariously walk on the dark end of the street, a way to safely confront the things that freak us out, a means of viewing the taboo.

Sooner or later, kids are going to check out horror. What you don’t do in that kind of situation? Demean the entire genre, put it down, call it garbage. What happens next is your kid will be at a sleepover, or even worse, poking around online. They’ll see something that they have no context for and is age-inappropriate. They will, simply put, freak out big time. It’s the cinematic equivalent of Preacher’s Kid Syndrome.

So what should you do? Keep in mind that, like humor, fear is highly subjective, and what terrifies one person will elicit yawns from another. As a parent, you’re gonna have to suck it up and do a little research before certain viewings.* If you’re looking for kid-friendly scary movies, you can start by checking out this list. You could also take them to see the genuinely pretty good kid horror movie The House with a Clock in its Walls. 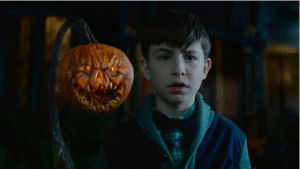 It’s 1955, and ten-year-old Lewis Barnavelt (Owen Vaccaro) is an orphan. His parents perished in a car crash, and all he has to remember them is a picture and a magic 8-ball. That’s stressful, and things get even more stressful when he’s plunked on a bus going to New Zebedee, Michigan, to live with his uncle Jonathan (Jack Black).

Jonathan is, not to put too fine a point on it, unique. He loves kimonos. Poker. Clocks — for the most part. He lives in a gigantic mansion where everything is a bit…off. In point of fact, Jonathan is a warlock, though not a terribly accomplished one. His next door neighbor is Mrs. Zimmerman (Cate Blanchett), and the two of them are the kind of friends that spend vast amounts of time mercilessly dunking on each other. 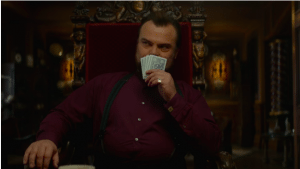 From there, Lewis settles into a fulfilling educational and social life, right? No, silly! The conventions of this type of movie dictate that Lewis must be a friendless outcast. He’s desperate to become pals with the wildly popular and weirdly named Tarby Corrigan (Sunny Suljic). He’s also desperate to solve a mystery, one involving a weird ticking noise behind the walls of his new home.

From there, in no particular order, we get: 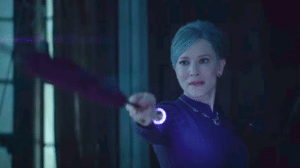 As we’ve discussed in the past, movie trailers can be insidious things. Give the trailer for The House with a Clock in its Walls a watch, and it’s easy to think that we’re confronted with yet another soulless CGI fest starring a comedian eager to pick up a nice paycheck. In fact, this film has an impressive and well-hidden pedigree.

Director Eli Roth is best known as a creator of wildly gory horror movies like Hostel and Cabin Fever, as well as the unfortunate remake of Death Wish earlier this year. I’m as surprised as anyone that a) he agreed to make a scary YA movie and b) how effective he is at it. He’s made an incredibly playful movie, one whose tone bounces between slapstick, light pathos, and some genuinely creepy moments. Roth knows that kids are more emotionally resilient than adults give them credit for, and I was impressed by how far a few of his scares went. His pacing drags occasionally, and cutting 10-15 minutes would have tightened things up nicely.

Based upon the novel by John Bellairs, Eric Kripke adapted the screenplay. Having created the seemingly endless television series Supernatural, Kripke knows a thing or two about regular folks confronted with the mysterious. His script isn’t bad, and he does well with ensuring our main characters have distinctive voices and personalities. I would have liked for him to have fleshed out the relationship between Lewis and Tarby a little, and it could have been done without adding extra time to the story.

For a movie like this to work, the main child actor has one job. Since everybody around them is playing a character that’s one degree or another of kooky, the kid needs to just be likable. As Lewis, Owen Vaccaro is precisely that. His performance is a little uneven in places, but that’s okay as he doesn’t need to reinvent the wheel here. Kyle MacLachlan appears fairly briefly and…well…let’s just say he’s a little stiff and leave it at that.

One of the main reasons to see this film is for the surprisingly effective comic duo of Jack Black and Cate Blanchett. Usually, Black shows up to do his high-energy goofball schtick and that’s pretty much it. If you’re looking for him to 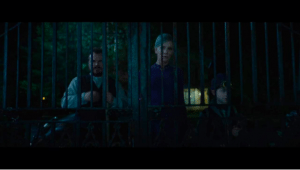 stretch himself here,** hoo boy, are you going to be disappointed, as he basically plays “Jack Black – Magician.” He’s in his comfort zone, and for this particular role, that’s okay. His chemistry with Cate Blanchett is terrific. By now, you probably know that Blanchett is one of our greatest living actors. Her range is astonishing, and I think she could believably play Malcolm X, a cinder block, or the entire population of Brazil. As Mrs. Zimmerman, Blanchett gets to play goofy in a minor chord, and she’s great fun.

Is The House with a Clock in its Walls a minor classic in the world of kid horror? I wouldn’t go that far. It is overall a good film that’s made with care, precision, and timing. For a certain kind of kid, this movie will act as a gateway drug to the wider and weirder world of horror cinema. If that happens to Polly’s oldest, I think I’ll owe her an extended apology.

*If you aren’t too film savvy, make www.imdb.com your new best friend. You can get vast amounts of information at the Internet Movie Database about virtually every film ever made.

**Black can be an extremely talented actor. Check him out in Bernie and Jesus’ Son.

Tim Brennan
Tim has been alarmingly enthusiastic about movies ever since childhood. He grew up in Boulder and, foolishly, left Colorado to study Communications in Washington State. Making matters worse, he moved to Connecticut after meeting his too-good-for-him wife. Drawn by the Rockies and a mild climate, he triumphantly returned and settled down back in Boulder County. He's written numerous screenplays, loves hiking, and embarrassed himself in front of Samuel L. Jackson. True story.
Tagged: cate blanchetteli rotheric kripkejack blackkyle maclachlanowen vaccarosunny suljicthe house with a clock in its walls
OnFortCollins.com is a locally-owned and operated directory and information guide for Fort Collins Colorado
Discover the best of Fort Collins shopping, restaurants, night life, breweries, events, business, outdoors, fun, local life, real estate, transportation, jobs, and schools.
Looking for what to do in Fort Collins? OnFortCollins.com has columnists, and bloggers to keep you up to date on the best of Fort Collins, Colorado.