What’s the point of consistently stepping outside our comfort zones? It’s healthy to stretch yourself. Most of us have been encouraged/yelled at by our parents to try new experiences, eat new delicacies, go to new places. By doing that, we get smarter, more empathetic, more sophisticated.

When filmmakers stretch themselves? That’s the good stuff. That’s when you have the chance to see something unique. Take Adam McKay for example. As a close friend of Will Ferrell’s, his directorial career began with films like Anchorman and Step Brothers, comedies that walked a fine line between surrealism and stupidity. McKay is also a pretty politically aware guy and his response to the 2008 housing crisis was to make the righteously angry The Big Short.

Other times when directors stretch themselves…well, it can be uneven. After directing the highly political JFK, Natural Born Killers, and Nixon, Oliver Stone proceeded to make the misanthropic noir U-Turn. After making The Last Temptation of Christ and Goodfellas, two of the greatest movies ever made, Martin Scorsese followed it up with the paranoid noir Cape Fear.

Hey…wait a minute! It’s almost as if there’s a pattern! It seems like, after they have firmly developed a signature, 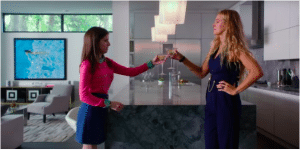 directors like to try something new and play in the noir sandbox. Can you blame them? There’s something cool about telling stories of lies upon lies, a seemingly good person finding themselves up to their neck in trouble. In 2016, Paul Feig remade Ghostbusters, which was savaged by internet trolls and just failed to break even. Did the experience motivate him to make the angry and anxious noir A Simple Favor? Perhaps.

If you’re a parent and you’re around other parents, you probably know someone like Stephanie (Anna Kendrick). A Connecticut mommy vlogger, she’s one of those parents that cheerfully volunteers for classroom activities. All of them. Need 200 cookies baked by 8:00 AM tomorrow? No problem, she’ll chirpily exclaim! Stephanie is mindful, positive, and achingly lonely. After a family tragedy, she’s a single mother to her young son, and that motherhood is all she has.

That is until Emily (Blake Lively) nonchalantly strolls into her life. Their boys are buddies, so that must mean the two women should become friends, right? Stephanie certainly thinks so, as she’s gobsmacked by Emily. Working a high-powered job in the city, Emily is acid-tongued, stylish, and she casually uses her beauty as a weapon. Sean (Henry Golding) is her husband, and he’s not immune to her emotional flaying. He wrote a novel that was successful. He hasn’t written another, and Emily won’t let him forget it.

Those casual cruelties don’t matter to Stephanie, because Emily is like a radiant sun that she’s happy to orbit. The two women drink martinis — lots of them, in Emily’s modern palace of a home, and Stephanie becomes smitten. Does she notice the acres of red flags, like when she takes a photo of Emily and Emily orders her to delete it? 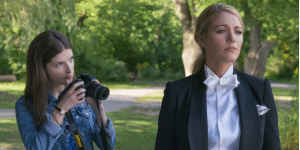 Hell, maybe Stephanie is color blind, or maybe she just can’t believe someone like Emily wants to be friends with someone like her. Everyone has their quirks, right? Then, Emily vanishes. The police are called. Sean is inconsolable, and Stephanie steps up to help him with his son and the house. As all of this is happening, it occurs to Stephanie that maybe there’s more to Emily than she thought. And then?

I can understand why Paul Feig wanted to make this movie. Based on Darcey Bell’s novel, it features indelible parts for charismatic and witty women, which is right in Feig’s wheelhouse. For A Simple Favor to work, two things need to happen. First, the two leads need to be played by a couple of very strong actors that can handle the material and have the right chemistry. Second, the tone needs to be precision-engineered.

As a director, Feig excels at strong parts for women and giving them the flexibility to let their characters come to life. He features long takes of Kendrick and Lively talking and drinking, allowing their personalities to bounce off one another while enjoying the joke of the confident Lively looming over the elfin Kendrick. While we don’t need yet another gloomy thriller, Feig’s tone is wildly inconsistent here, and moments of real suspense are often undercut by jokes. It’s almost as if he set out to make a psychological thriller, and kept having to be reminded during the script that he’s not making a full comedy. There are some genuinely creepy moments, but Feig can’t quite manage the balancing act required. 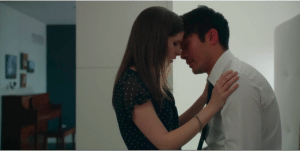 Jessica Sharzer adapted the screenplay, and I didn’t love her going to town at the cliche buffet. There are dark family secrets! A possibly sinister elderly couple! A suspiciously large insurance policy! Noir was at its height of popularity in the 1940’s and 1950’s, and those audiences would have rolled their eyes at some of this stuff. The mystery is a little too predictable, but Sharzer absolutely nails the character work and gives the cast meaty roles to chew on. On top of that, Sharzer’s script is very funny, featuring some deft wordplay and an all-timer of a joke near the end of the film.

Feig is one of those directors that actors adore because he’s able to give even the smallest parts something special. The mighty Linda Cardellini has a single scene as an unhinged artist, and she’s funny and unsettling in equal measure. I also liked Bashir Salahuddin as Summervile, the cop investigating Emily’s disappearance.* You can see in Salahuddin’s eyes that he suspects something is up, but he’s delighted to see how things play out.

As Stephanie, I liked Anna Kendrick. She effectively sells the balance between Stephanie’s rampaging insecurity and her quiet competence as a problem solver. Stephanie is a smart woman, and she has a real knack for focusing on the best way to work a problem. That is, when her emotions aren’t getting in the way of things. Kendrick does excellent work playing a person who feels relatable and unique.

You might know that Blake Lively is married to Ryan Reynolds. When she saw her husband playing the unstable Deadpool, I wonder if Lively thought, “That looks like fun!” Like the merc with a mouth, Lively’s Emily excels at 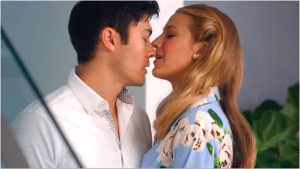 keeping everyone around her off-balance by using her wit and physicality in unexpected ways. Emily is a meaty role, requiring an actor to be seductive, sarcastic, narcissistic, ice cold, and surprisingly vulnerable. Lively absolutely nails all of that, and she plays the role with skill and humor.

*I know, we have another situation where the black guy plays the cop.

Tim Brennan
Tim has been alarmingly enthusiastic about movies ever since childhood. He grew up in Boulder and, foolishly, left Colorado to study Communications in Washington State. Making matters worse, he moved to Connecticut after meeting his too-good-for-him wife. Drawn by the Rockies and a mild climate, he triumphantly returned and settled down back in Boulder County. He's written numerous screenplays, loves hiking, and embarrassed himself in front of Samuel L. Jackson. True story.
Tagged: a simple favoranna kendrickbashir salahuddinblake livelyhenry goldingjessica sharzerlinda cardellinipaul feig
OnFortCollins.com is a locally-owned and operated directory and information guide for Fort Collins Colorado
Discover the best of Fort Collins shopping, restaurants, night life, breweries, events, business, outdoors, fun, local life, real estate, transportation, jobs, and schools.
Looking for what to do in Fort Collins? OnFortCollins.com has columnists, and bloggers to keep you up to date on the best of Fort Collins, Colorado.