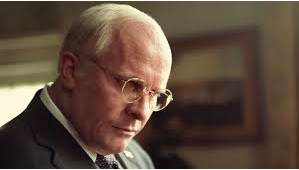 There are a lot of people extremely angry at Adam McKay’s new film Vice. It’s not surprising, considering the film a) is about some of the most well-known people in recent history and b) is political. If you’re reading this, you probably have an opinion about Vice-President Richard Cheney, whether you think he was a tough government operator who did what was necessary, or you think he was a major player in Hell’s demonic hierarchy.

The political aspects make things even trickier. We’ve talked before about how at this moment in history, virtually everything is polarized. One of the problems is, since we’re so polarized, we’re often unwilling to examine different viewpoints or arguments. What are the odds these days that a committed liberal will read David French’s columns, or that a staunch conservative will really consider what Ezra Klein has to say?

At the end of the day, I think there’s one reason above all that explains the vitriol that’s been hurled at Vice; tone. Suppose, even though we live in a time when politics are being thrown at our faces like malevolent cream pies, you decide you’re going to see a movie focused on politics. You might have an expectation that the film will either be somber and serious or confirm your biases.

But what happens when the tone of the film is arch? Aggressive? Totally unconcerned with fairness or even-handedness? What if we’re accused of culpability? Folks on both sides of the aisle love to accuse the other side of being snowflakes, but too often we’re all reflexively defensive. Vice tells the story of Dick Cheney’s political career with seething anger and sharp intelligence, and one of the parties responsible for his rise is us.

It’s 1963, and we’re introduced to Dick Cheney (Christian Bale). He’s been pulled over by a traffic cop, and Dick is drunk out of his mind. This is not uncommon for him, as he was thrown out of Yale for partying instead of studying. Instead, he works as a lineman in Wyoming, and when another lineman gets into a hideous accident, Dick doesn’t offer the man help or make a crude joke. He watches the lineman writhe in pain, and we see him filing away some unknown information for later use.

In another life, Dick might be content to fix power lines and drink cheap booze. His wife Lynne (Amy Adams) won’t have it, refuses to accept it. And so, the man whom we just saw dispassionately studying a wounded colleague, is 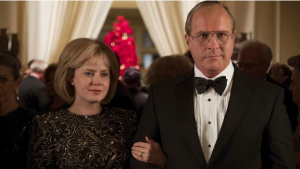 shamed into cleaning up his life. By 1969, he’s done so swimmingly, and he’s become a White House intern. Dick sees a speech by Chief of Staff Donald Rumsfeld (Steve Carell) and learns his proximity to real power is much closer than he ever thought.

From there, we see Dick steadily climbing the rungs of government. He’s always paying attention, learning anything he can, and we soon see that he’s a man who never says anything unless it’s important. During a Congressional run, he suffers the first of many heart attacks, and they seem as inconvenient to him as temporarily losing WiFi. Lynne sticks by him, and he manages to juggle his political career while they raise two daughters.

Dick is named Secretary of Defense during the Gulf War, and his daughter Mary (Alison Pill) comes out to him. He loves her, accepts her, and when Bill Clinton takes office, the Cheneys enjoy an idyllic retirement spent writing books and raising Golden Retrievers. The credits roll…then George W. Bush (Sam Rockwell) decides he wants to be President. From there, it gets real.

There’s a common trap we can fall into as filmgoers, the trap of, “I disagree with this, so it’s a bad movie.” Lately, I’ve tried very hard to suss out a filmmaker’s intent and determine if they’re successful in what they’re trying to say. If I wanted something different out of a film than what I got, that’s entirely my problem, not the movie’s problem. The important detail to consider is — how effectively did the director make the film they set out to make? 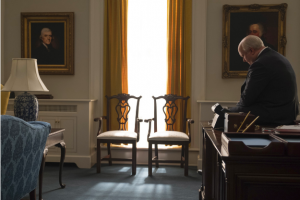 In the case of Adam McKay, he made precisely the film he wanted to make. Back in 2015, he made The Big Short, a film about the 2008 economic collapse. Characters broke the fourth wall, Margot Robbie explained mortgage-backed securities while lounging in a bubble bath, and a mountain of complex financial information was delivered to the audience in a clear and cogent manner. In Vice, McKay is doing the same thing, only he’s explaining how the federal bureaucracy functions, and how a skilled operator like Dick Cheney could turn the levers of power to his own ends. I could tell you that McKay directs with creativity and verve, but it might make more sense if I just told you that McKay is like Oliver Stone without the conspiracy theories and with a vicious sense of humor.

McKay also wrote the script, and he has a mysterious narrator played by the great Jesse Plemons guiding us through the evolution of American politics like Virgil guiding Dante through Hell. Wryly, Plemons shows us as the concept of the loyal opposition in political life became slowly twisted into a mindset of winning at all costs, a mindset that tragically persists.  But McKay’s script isn’t merely a hatchet job against Dick Cheney. He humanizes Cheney, shows him as a man who loves power, loves his family, and sometimes struggles with finding a balance.

Thanks to a combination of award-winning prosthetics and an upsetting amount of pie, Christian Bale looks exactly like Cheney. He’s not simply doing an impression of the V.P., however. Watch footage of the real Cheney, and you’ll see a man at ease with stillness. His actions and words are always measured, and Bale perfectly captures that calculation. Amy Adams plays Lynne Cheney as a woman made of steel, but her character is a little bit of an enigma. I was never quite sure if she genuinely loved Dick, recognized the potential in him that could help her, or a combination of the two. Their chemistry feels real, and these two have a legitimate partnership in all senses of the word.

I liked Steve Carell as Donald Rumsfeld for the most part. He sells Rumsfeld’s ruthlessness and blithe indifference toward decency, but he doesn’t capture the man’s bulletproof confidence. I liked Sam Rockwell less as the buffoonish Dubya. While I suspect this is more of a script decision, it feels like portraying Bush as a gormless lackey to Cheney lets the 43rd President off the hook.*

Vice is one of the most effective political satires made in a long time. It captures the essence of a man who paid attention to the details and used ideology and bureaucracy in a sociopathic quest for absolute power. More importantly, Adam McKay’s film never says our corrupted system is due to evil Republicans or vile Democrats. In the end, the problem isn’t “them.” It’s us. It’s only ever been us.

*Good thing the current Republican Party is filled with people of sober judgment and character.

Tim Brennan
Tim has been alarmingly enthusiastic about movies ever since childhood. He grew up in Boulder and, foolishly, left Colorado to study Communications in Washington State. Making matters worse, he moved to Connecticut after meeting his too-good-for-him wife. Drawn by the Rockies and a mild climate, he triumphantly returned and settled down back in Boulder County. He's written numerous screenplays, loves hiking, and embarrassed himself in front of Samuel L. Jackson. True story.
Tagged: adam mckayalison pillamy adamschristian balejesse plemonslily rabeSam Rockwellsteve carelltyler perryvice
OnFortCollins.com is a locally-owned and operated directory and information guide for Fort Collins Colorado
Discover the best of Fort Collins shopping, restaurants, night life, breweries, events, business, outdoors, fun, local life, real estate, transportation, jobs, and schools.
Looking for what to do in Fort Collins? OnFortCollins.com has columnists, and bloggers to keep you up to date on the best of Fort Collins, Colorado.