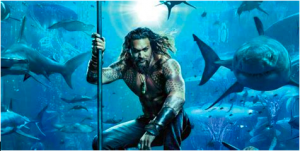 Poor Aquaman. Ask any kid, any comic aficionado, any pop culture enthusiast who their favorite superhero is. Batman will come up a lot, Spider-Man and Wolverine will certainly get mentioned, even Black Panther and The Flash will get some love*. But the King of Atlantis? Eh…not so much.

Paul Norris and Mort Weisinger created the character for DC Comics way back in 1941, and he languished in obscurity until the era of Saturday morning cartoons in the 1960s. From that point on, Aquaman became a joke. You could tell people all day long that he was immensely powerful, due to an ability to withstand the crushing pressures of the deep. The response you’d invariably get would be, “Guy talks to fish.”

But things change, and weirdly it was the misbegotten DC Extended Universe that gave the character a new lease on life. He first appeared briefly in the not-good-at-all Batman v. Superman: Dawn of Justice, then actually got stuff to do in the pretty okay Justice League. The irony is not lost on me that the new film Aquaman is, along with Wonder Woman, the reason the DCEU isn’t tanking. It’s also a ton of fun in its own right. 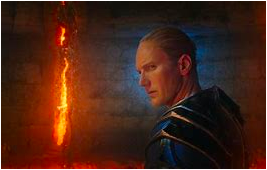 In the long-ago time of 1985, we’re introduced to lighthouse keeper Tom Curry (Temeura Morrison). As so often happens, he discovers that a beautiful and unconscious woman has washed ashore during a real humdinger of a storm. This is Atlanna (Nicole Kidman), a princess of the undersea nation of Atlantis, and these two crazy kids are in a real good news/bad news situation.

The good news is, they fall in love and have a child. His name is Arthur, and he just might be a union between the Atlanteans and the surface-dwellers. The bad news is that Atlanna decided to peace out on an arranged marriage, and the Atlanteans are a little ticked off about it. A squad of commandoes tries to take Atlanna back home, and she proceeds to wipe the floor with them. But she knows they’ll never stop coming, and she tearfully bids farewell to her child and husband.

Flash forward to the present and Arthur is now both grown up and tatted up. Played by Jason Momoa, Arthur is doing his part to keep the seas safe, including trouncing the submarine pirate Manta (Yahya Abdul-Mateen II). Little does our fishy friend know, conflict is brewing under the waves. His half-brother Orm (Patrick Wilson) is on a mission to unite the tribes of Atlantis and attack the surface world. 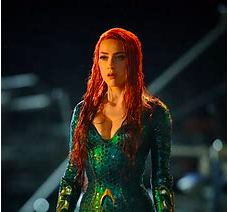 Now, we enter into The Hero’s Journey territory, as Arthur is forced to undertake a quest. Along with yet another sea princess, Mera (Amber Heard), Arthur must find the whereabouts of the mystical Trident of Atlan, defeat Orm’s evil schemes, and take his place as the rightful ruler of Atlantis.**

Look, either you’re into a movie in which Dolph Lundgren rides an armored sea horse, an octopus plays taiko drums, and Julie Andrews voices a Lovecraftian horror, or you’re not. Aquaman doesn’t quite have the elegance and innovation of Spider-Man: Into the Spider-Verse, but it’s still a movie that’s confidently ridiculous and great fun.

If you had told me that the guy who made Saw and The Conjuring would be the one to make Aquaman cool again, I would have been a little surprised. It’s maybe not so surprising, because James Wan directed the hell out of this movie. There’s always something going on, whether it’s a massive tidal wave, a horror-influenced attack of piranha creatures, or a gigantic underwater battle that gives The Lord of the Rings a run for its money.

I think that’s the part of Wan’s approach that I liked the most. Up until very recently, superhero movies tended to be timid. They shied away from the more…well, let’s just say creative aspects. Brightly colored costumes were replaced with tactical leather, and filmmakers constantly talked about keeping the material “grounded.” Like an undersea Viking, Wan loudly scoffs at that foolishness and dives deep into some of the craziest imagery I’ve seen in a blockbuster. While his pacing drags occasionally, and the film feels overlong, you can almost hear Wan gleefully cackling behind the camera as he throws everything he can at the audience. 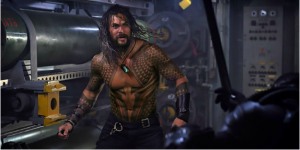 The script, by David Leslie Johnson-McGoldrick and Will Beall, does one thing very wrong and another very right. Unfortunately, there’s a blue whale-sized amount of exposition here, where characters talk about Atlantean politics, vengeance, justice, and ancient treaties, instead of showing us all of this in a more dynamic fashion. While we have a bunch of scenes of fisticuffs, trident battles, and explosions,*** we also have conflicts getting resolved through discussion, compromise, and a willingness to accept responsibility and forgive. This is a very un-superhero-like approach to conflict management, and I am very much here for it.

I liked that the cast, with the exception of Momoa, treats the material as Shakespearean tragedy. Nicole Kidman and Patrick Wilson both seem particularly dialed into themes of destiny and the long arc of history. As Arthur, Momoa has a swaggering charisma. He knows he’s trying just a little too hard to be cool, and we see that overcompensation peek out occasionally. I also enjoyed Yahya Abdul-Mateen II as the rage-filled Manta, and it’s nice to see a bad guy who has a right to be angry.

As filmgoers, we’re lucky. We have another movie about a biracial hero coming to terms with his place in the world, a superhero film that enthusiastically embraces its more ludicrous tropes, and a sprawling epic that makes the movies of the DCEU worth watching again. I’ll be really happy when they make a proper Superman movie and stop portraying Batman as a serial-killer-in-training. Until then, I’m more than happy to hang with Aquaman.

*Not to be a sexist pig here, but let’s also give some love to Black Widow and Wonder Woman. Hopefully, Spiden-Gwen and Captain Marvel will be joining the ranks of the favorites soon.

**If presidential elections involved tracking down a magical artifact and doing battle for the amusement of the public, I bet more people would vote.

Tim Brennan
Tim has been alarmingly enthusiastic about movies ever since childhood. He grew up in Boulder and, foolishly, left Colorado to study Communications in Washington State. Making matters worse, he moved to Connecticut after meeting his too-good-for-him wife. Drawn by the Rockies and a mild climate, he triumphantly returned and settled down back in Boulder County. He's written numerous screenplays, loves hiking, and embarrassed himself in front of Samuel L. Jackson. True story.
Tagged: amber heardAquamandavid leslie johnson-mcgoldrickdolph lundgrenjames wanjason momoanicole kidmanpatrick wilsonwill beallyahya abdul-mateen II
OnFortCollins.com is a locally-owned and operated directory and information guide for Fort Collins Colorado
Discover the best of Fort Collins shopping, restaurants, night life, breweries, events, business, outdoors, fun, local life, real estate, transportation, jobs, and schools.
Looking for what to do in Fort Collins? OnFortCollins.com has columnists, and bloggers to keep you up to date on the best of Fort Collins, Colorado.