As much as we love to bellyache about Hollywood failing to come up with new ideas, there are two irrefutable facts we have to contend with. The first is that, frequently, when something blazingly original is released theatrically, audiences shun it. Speed Racer was a failure. Cloud Atlas was a failure. Mortal Engines was a failure.

The second fact? As long as there have been movies, there have been adaptations. It’s hardly a new phenomenon. George De Maurier’s 1895 novel Trilby, which I’m sure you all have read, was adapted into a silent film way back in 1915. This kind of thing has been done since the beginning, and you know what? There’s nothing wrong with that. Where it gets tricky though is knowing the right way to adapt something.

Is there a right way, though? I’m not sure, but there’s plenty of wrong ways. Before Harry Potter and the Sorcerer’s Stone was released in 2001, our old pal Steven Spielberg kicked around the idea of directing himself. I can hear you squeeing in delight over that concept, but consider that he originally wanted it to be animated, set in the United States, and the voice of the beloved Mr. Potter would be played by Haley Joel Osment. We’re familiar with the Wizarding World and how it should look and feel, but what Spielberg had in mind didn’t fit in terms of a proper adaptation.

Where it gets tricky for me is when an adaptation happens and I’m completely unfamiliar with the source material. In 1990, Yukito Kishiro created the manga series Gunnm,* also known as Battle Angel Alita. Our other old pal James Cameron read the manga, fell in love with it, and announced in 2003 he’d make an adaptation. However, his time was taken up by making unasked-for sequels to Avatar, and he reluctantly stepped back to produce and co-write the screenplay. Robert Rodriguez was tapped to direct, and now we have Alita: Battle Angel. Is it good? Yes, but it’s not without problems.

We’re unceremoniously dropped into the year 2563, and things have not improved in the far-flung future. An apocalyptic war has taken place, rendering the majority of Earth demolished. One of the last settlements is Iron City, a sprawling city built around a junkyard. A junkyard for what, you might reasonably ask? Above Iron City is Zalem, a floating metropolis for the wealthy, and their discarded junk is picked through by the inhabitants below.

One of those inhabitants is Dr. Dyson Ido (Christoph Walz), a surgeon of cyborgs. During a scavenging expedition he finds something remarkable: the head and upper chest of a female cyborg, and within the skull is a miraculously intact human brain. The good doctor sets out to rebuild her, and in no time at all, he’s transplanted her into a spare cybernetic body that he was originally intending for his now-deceased daughter. Does the doc have some lingering issues? He certainly does!

Anyway, the cyborg now known as Alita (Rosa Salazar) is brought back online. She has no memories of her past life, but she’s curious about the world and her place in it. In short order, she also discovers that she possesses hidden combat capabilities. Alita is fast, strong, and tough as hell. She’ll need it since she has an enormous amount of plot to wade through, including: 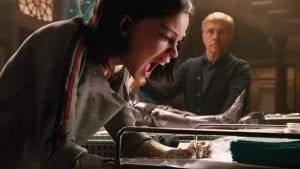 Guys, that plot synopsis was positively exhausting to write. Not only because of the blizzard of science-fiction-y names and terms thrown around here, and I frequently asked myself questions like, “Which one is Zalem again, the floating city or the loudmouthed dick that Ed Skrein plays?” When it comes to the thicket of plot we have to hack our way through, I have good news and bad news for you.

The good news is that Robert Rodriguez directed. Since his 1992 debut film El Mariachi, Rodriguez has developed a reputation as a filmmaker who can do a lot with a little. He doesn’t need a huge budget to make a film with kinetic action and energetic camerawork. Here, he’s got his biggest budget ever, reportedly somewhere in the neighborhood of $200 million. There’s always something impressive to look at, and even when the lumbering plot threatens to crush the film, Rodriguez throws something cool at us every few minutes as a reward for paying attention.

Let’s pause for a moment and talk about the gigantic CGI eyes that Alita sports. In an interview with Empire magazine, Rodriguez said, “It was always Jim [Cameron]’s intention to create a photo-realistic version of the manga eyes that we’re so accustomed to seeing…If the eyes are the windows to the soul, we have some pretty big windows. You can see a lot going on in there! When it gets to the emotional scenes it’s really uncanny and striking. And captivating!” Here’s the thing about those freaky-big peepers…yes, it’s uncanny. No, it’s not captivating, or necessary for that matter. I found it to be occasionally distracting.***

The screenplay is credited to Cameron and co-writer Laeta Kalogridis, but it felt to me like Cameron was the dominant writer here. I give Cameron lots of respect, considering he’s one of the world’s most talented filmmakers. As a writer, he strikes me as being more motivated by plot as opposed to characters. Give Aliens, Titanic, The Terminator, or The Abyss a watch, and you’ll see he’s a writer who loves set pieces and story mechanics, and people are a means to make those things happen. With Alita, it’s the same kind of thing here. Dialogue is frequently either clunky or overly expositional, and the script doesn’t seem to want to slow down and hang out with the characters much.

Let’s pause for one more moment and talk about the adaptation itself. The film was adapted from four volumes of the original Battle Angel Alita manga. Hoo boy, does it ever feel like it came from four volumes! Like an overstuffed burrito, there’s plot oozing out all over the place with a serial killer, a conspiracy, a love story, a sports competition, and more. There’s plot everywhere, and that’s a problem since the character of Alita is too often reacting to stuff happening instead of driving the story forward with her own motivations. 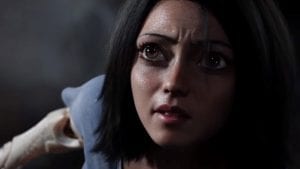 How’s the cast, you’re asking? Fine…I guess? Christoph Waltz is basically an exposition bot here, but he makes it tolerable through a warm performance. The same goes for Mahershala Ali and Jennifer Connelly, both of whom are talented actors stuck playing two-dimensional characters. Despite being partially hidden behind some weird-ass CGI, I liked Rosa Salazar as Alita. She can do the hardened warrior thing well, but I appreciated that the character’s natural state is to be friendly, curious, and positive. We could have had an Alita that’s a traumatized killing machine, and I can’t even with that right now.

Is Alita: Battle Angel a good adaptation? Not having read the original source material, I can’t say. My instinct tells me that perhaps Cameron and Kalogridis went for too much too fast, and they should have trimmed down the plot and focused on perhaps one or two volumes.**** However, I’d be lying if I said I didn’t enjoy the fast-paced and creative action. We’ve got a good time at the movies here, but a screenplay that was ruthlessly trimmed could have made it great.

*The literal translation is “Gun Dream,” which would have made for an incredible title

**Nova is a cameo played by a fairly major celebrity. While it would be churlish of me to tell you who it is, trust me when I tell you that it doesn’t really matter much

***It’s a little weird to me that Cameron demanded absolute fidelity to the source material when it came to Alita’s eyes, but it doesn’t seem like he’s terribly interested in why. To learn more about why characters in anime and manga have gigantic eyes, read this fascinating explanation

****If you’ve read the original manga, please let me know if this is legitimately a good adaptation

Tim Brennan
Tim has been alarmingly enthusiastic about movies ever since childhood. He grew up in Boulder and, foolishly, left Colorado to study Communications in Washington State. Making matters worse, he moved to Connecticut after meeting his too-good-for-him wife. Drawn by the Rockies and a mild climate, he triumphantly returned and settled down back in Boulder County. He's written numerous screenplays, loves hiking, and embarrassed himself in front of Samuel L. Jackson. True story.
Tagged: alita: battle angelchristoph waltzjackie earle haleyjames cameronjennifer connellykeean johnsonlaeta kalogridismahershala alirobert rodriguezrosa salazar
OnFortCollins.com is a locally-owned and operated directory and information guide for Fort Collins Colorado
Discover the best of Fort Collins shopping, restaurants, night life, breweries, events, business, outdoors, fun, local life, real estate, transportation, jobs, and schools.
Looking for what to do in Fort Collins? OnFortCollins.com has columnists, and bloggers to keep you up to date on the best of Fort Collins, Colorado.