I Started a Joke 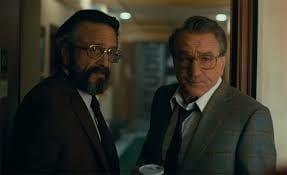 “So, when you find yourself locked onto an unpleasant train of thought, heading for the places in your head where the screaming is unbearable, remember there’s always madness. Madness is the emergency exit. You can just step outside and close the door on all those dreadful things that happened. You can lock them away…forever.”

That dialogue is from The Killing Joke, alternately the best and worst story about The Joker ever written. On its face, the story is simple. The Clown Prince of Crime has kidnapped Commissioner Gordon, and his plan is to drive Gordon mad, proving to both him and the Batman that anyone can lose their mind and descend into insanity. All it takes is one bad day. The best stories seem to be simple, but a little investigation reveals hidden complexity.

That complexity is why The Joker, a character originally created in a 1940 issue of Batman, still endures. He’s appeared in hundreds of comics, video games, artwork, and other media. It’s film, however, where the character has truly come to life; no wonder actors love playing him, as you can take him in an infinite number of different directions. Cesar Romero played him as a campy clown with a painted-over mustache. Jack Nicholson played him as a peacocking narcissist. Heath Ledger played him as an urban terrorist without a past. Jared Leto played him as a deeply annoying Juggalo. Hell, Mark Hamill might have delivered the definitive portrayal of him as a mischievous agent of chaos.

There’s a single kernel of truth within the heart of The Joker: giggling nihilism. To him, nothing matters. Not love, not death, not responsibility or decency. It’s all a twisted joke, and he’s the only man who can see that. The right portrayal of him depends on empathy and fearlessness, while never forgetting that core fundamental concept. With Todd Phillips’ new film, Joker, we have an up-to-the-moment take on the character made with skill, intelligence, and no small amount of confusion. 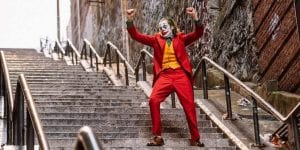 You can’t blame Arthur Fleck (Joaquin Phoenix) for feeling a little crazy. He’s got a screaming head full of mental issues, barely managed by numerous medications. One issue that can’t quite be managed is the laughter. Specifically, when he feels stressed, he’ll erupt in a high-pitched cackle at the most inopportune times. Arthur carries a card that explains his condition and urges a modicum of compassion, but nobody seems to care.

Compassion is in short supply in Gotham City. A garbage strike has deposited thousands of pounds of trash throughout the city. Economic catastrophes, crime, and income inequality have transformed Gotham into a simmering powderkeg, and all it takes is one man to light the fuse. Who would have thought that man would be Arthur?

Certainly not him—at least not initially. He makes a meager living working as a street clown and dreams of becoming a famous stand-up comedian. If things really worked out, maybe he could even meet his idol Murray Franklin (Robert De Niro), a glib talk show host. For now, that doesn’t seem likely, particularly since he needs to care for his mother Penny (Frances Conroy), a woman suffering from profound psychological problems.

All Arthur needs is something to believe in, someone to give him a chance. There’s the slimmest thread of hope when he meets Sophie (Zazie Beetz), the pretty single mom who lives down the hall. But then there’s the gun he receives from a cruel co-worker, the social worker who informs him that budget cuts have removed access to his medication, the mayoral campaign of business titan Thomas Wayne (Brett Cullen), and a pack of Wall Street bros who just won’t leave him alone. Up against all of that and more, all Arthur can do is laugh. 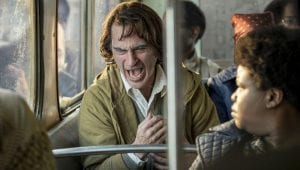 I still kind of can’t believe Joker even exists. Consider that we have a film about Batman’s greatest nemesis that only briefly portrays Batman as a frightened 7-year-old boy.* The main character is played by Joaquin Phoenix, one of the most talented actors on the planet. The film is directed by the guy who made The Hangover trilogy. That simple narrative would indicate a clusterf–k of epic proportions, no? No, as this simple story hides complexities.

Director Todd Phillips deserves credit since he’s made a superhero movie that’s less an action movie and more a gritty character study. His film shares DNA with 70’s classics such as Taxi Driver and One Flew Over the Cuckoo’s Nest. His Gotham City is a decaying metropolis brimming over with despair, and we can feel Phillips luxuriating in gorgeous sleaze. From a technical perspective, Phillips has made an excellent film, one with strong cinematography, creepy editing, and (mostly) solid pacing.

Before we go too much further, I can hear you thinking, Hold up there, hoss. Should we really be taking a movie about a cartoon clown seriously? We should because The Joker can be interpreted as a trickster archetype or a means of blowing up a corrupt economic system a la Occupy Wall Street. I even read an interesting argument about how The Joker represents a Nietzschean superman who creates his own rules and rejects conventional morality through a will to power.

That’s great and all, but the script by Phillips and Scott Silver is frustratingly inconsistent. If we’re going to have a character study where a man is broken by an unfeeling society, we should have a series of moments plotting Arthur’s fall and rise. The path should look “insane,” but in hindsight, the pieces should fit together and feel inevitable. There should be a moment or moments where Arthur chooses to be The Joker. Instead, it feels like Arthur’s character is yanked all over the place in a crazy-quilt of trauma. Yet speaking of inconsistency, there’s a sequence late in the film where Arthur achieves self-actualization, and I thought, “There he is. There’s The Joker.” When the script works, it works. Their screenplay does have a number of clever details. I particularly enjoyed Thomas Wayne portrayed as a Trumpian tycoon entering politics** and Arthur’s spiral caused by conservative budget-cutting. There are a few moments of humor, but only a few. You’d think that a movie about The Joker would be…y’know, funny.

I literally cannot imagine any scenario in which Joaquin Phoenix doesn’t receive an Academy Award nomination. He’s that good as Arthur, and it starts with Phoenix losing over 50 pounds and transforming himself into an emaciated scarecrow. If you’ve seen the trailer, you’ve seen him twitching, dancing spasmodically, and laughing. His performance, thankfully, is more than a collection of tics. Phoenix lets us into Arthur, showing us a man who might not necessarily be good, but the potential is there. He’s mesmerizing, and he’s ably supported by a number of strong actors. I’m pleased that, between this and The Irishman, Robert De Niro seems to be on a career upswing. I was also highly amused to briefly see Marc Maron, a noted hater of superhero movies, showing up as Murray Franklin’s producer. The great Brian Tyree Henry has a strong scene as a clerk in a certain asylum you might be familiar with. 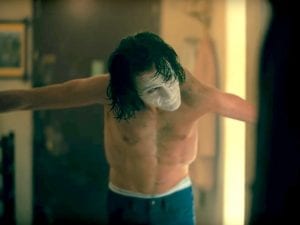 I can’t say that Joker is a great film. Todd Phillips, Joaquin Phoenix, and the cast and crew have made a very good movie that’s sure to polarize audiences and, like Fight Club, is sure to be misunderstood. Is it the right movie for today, for times that feel like we’re tipping into the abyss? Perhaps, and perhaps we always feel that way. Near the end of The Killing Joke, The Joker is pleading with Batman, begging The Dark Knight to understand his point of view. He says, “It’s all a joke! Everything anybody ever valued or struggled for…it’s all a monstrous demented gag! So why can’t you see the funny side? Why aren’t you laughing?” How does Bats respond? “Because I’ve heard it before…and it wasn’t funny the first time.”

*The nerd part of me got upset here. “If Bruce Wayne is only seven here, while The Joker is, let’s say 40, then we have a big-ass age discrepancy! Figure after his parents are killed, Bruce spends the next 15 years going to school & doing pre-Batman stuff. If he dons the cape when he’s 22, Bruce is going up against a Joker who’s pushing 60! The Joker should never be concerned about prostate health!” Then I thought, “Relax, it’s just a goddamn movie.”

**A smart friend of mine said that nothing in movies is an accident. Look at how two of the three Wall Street bros on the subway are dead ringers for Eric Trump and Donald Trump Jr.

Tim Brennan
Tim has been alarmingly enthusiastic about movies ever since childhood. He grew up in Boulder and, foolishly, left Colorado to study Communications in Washington State. Making matters worse, he moved to Connecticut after meeting his too-good-for-him wife. Drawn by the Rockies and a mild climate, he triumphantly returned and settled down back in Boulder County. He's written numerous screenplays, loves hiking, and embarrassed himself in front of Samuel L. Jackson. True story.
Tagged: brett cullenbrian tyree henryfrances conroyjoaquin phoenixjokerrobert de niroscott silvertodd phillipszazie beetz
OnFortCollins.com is a locally-owned and operated directory and information guide for Fort Collins Colorado
Discover the best of Fort Collins shopping, restaurants, night life, breweries, events, business, outdoors, fun, local life, real estate, transportation, jobs, and schools.
Looking for what to do in Fort Collins? OnFortCollins.com has columnists, and bloggers to keep you up to date on the best of Fort Collins, Colorado.