Hollywood gets things wrong all the time. Possibly the most common error made by writers, directors, producers, and the studio executives overseeing the whole thing? It’s that audiences need the main characters to be likable. That’s not correct, because for a film to succeed, your main character doesn’t have to be someone you’d want to have a beer with. They need to be interesting.

The problem comes down to confusing sympathy with empathy. Think of it like this; with sympathy, you’re having a positive emotional reaction to someone else’s situation. In that situation, you like the main character and that like informs how you feel about them. When you watch The Fugitive, you feel for Harrison Ford, since his wife has been killed and he’s being wrongfully accused of her murder.*

With empathy, on the other hand, you’re sharing a character’s reaction and putting yourself in their shoes. Here’s where things can get interesting, since you can share an aspect of a reaction without exactly immersing yourself into the same situation. You don’t have to like the character, but you do get where they’re coming from. We’ve all been screwed over by someone and sought satisfaction. We’re not going to react like The Bride in Kill Bill by grabbing a katana and slicing people into salami.** Yet we can still relate to her roaring rampage of revenge. 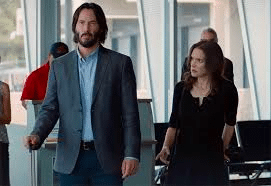 Now we know that a character doesn’t have to be likable for us to empathize with, right? We can empathize with the desperate loneliness of Norman Bates, or the twisted love Hannibal Lecter feels. But what happens when you have a movie where you feel neither empathy or sympathy for the characters? You have a movie like Destination Wedding.

We’re introduced to Lindsay (Winona Ryder) and Frank (Keanu Reeves). They’re at the airport, waiting impatiently and unhappily. These two are planning to hop onto an eight-seat plane, which will whisk them to the sun-drenched California wine country hamlet of Paso Robles for a wedding. Truth be told? They’re pretty pissed off about the whole thing.

The groom (Ted Dubost) is Frank’s half-brother. Frank despises him, but he’s attending to keep peace in the family. The groom was also engaged to be married to Lindsay years earlier, and she’s attending in an attempt to gain closure about the whole thing. In your average movie like this, you’d expect some wacky characters, some gentle laughs, and a heaping helping of romance. That doesn’t happen here. At all.

Right out of the gate, Lindsay and Frank start bickering, when he tries to cut in front of her in line. They start to realize their destination is the same place. Lindsay says, “How many destination weddings can there be in Paso Robles?” Frank responds acidly with, “I was hoping there were two.” From there, we’re off to the races. 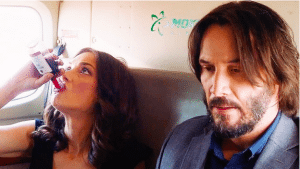 They talk smack about the bride (DJ Dallenbach). They bitch about their hotel rooms. They piss and moan about virtually every person, place, or thing possible. I’m sure you can see this coming from a country mile away, but these two people who loathe everything and everyone are the only ones meant for each other, and the only ones who could ever possibly tolerate each other.

Is there a place in the world for a vicious takedown of romantic comedies in general and weddings in particular? Absolutely. The problem is, Destination Wedding is not that movie due to some absolutely crippling problems. I could see what it wanted to be, and it tried very very hard to be that thing, but like a walrus aspiring to join the NBA, some things just ain’t gonna happen.

Victor Levin directed, and the trivia page of the IMDB tells me that this film was shot in a mere 10 days. I believe that, since the film definitely looks cheap. We see multiple scenes in anonymous-looking hotel rooms, and the scenes taking place at the wedding or in a winery feel so rushed that I suspect Levin had a frustratingly limited amount of time to 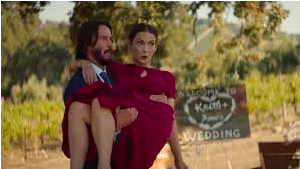 shoot at those locations. This film needs a strong sense of place so that we can see what Frank and Lindsay are pushing back against, and other than a few panoramic shots of the wine country, everything feels bland.

The alternate title of the film is A Narcissist Can’t Die Because the Whole World Would End, and with a title like that, you know you’ve gotten off the exit to Aren’t-I-Clever Town. Levin wrote the script as well and one of the issues is that, with the exception of a little background chatter, the only speaking parts in the entire film are Lindsay and Frank. That’s a clever approach, since it’s showing their enormous narcissism. However, that causes us to lose empathy. We should either be able to see them interacting with other wedding guests and get a sense of their irritation, or better yet, see them complaining and show that, in reality, the guests are fine and these two are the real problem.

Levin also is a writer not unlike Kevin Smith or Diablo Cody, where all the characters speak in a stylized patois. Ordinarily, that’s fine, because when Cody and Smith do it, they can get some pretty sharp zingers in. The problem here is that not only do Frank and Lindsay sound essentially the same, but their jokes aren’t particularly funny. I smiled a few times, but this script should have had me cackling throughout.

The other problem is chemistry between the two leads. Winona Ryder and Keanu Reeves have chemistry, for sure, but it’s not the right kind of chemistry, one that complements the feel of this film. On the one hand, Ryder can handle a character that’s this snide and spiky, while still making her relatable. She’s a highly talented actor that’s in the midst of a well-deserved comeback, and I see why she took this role. 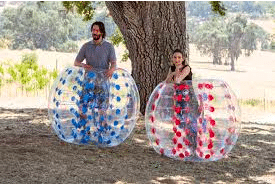 On the other hand is ya boi Keanu. In all seriousness, while Reeves has a limited acting range, he does legitimately excellent work when he’s in that range. I give him big props for stretching himself here, but as a hyperverbal misanthrope, he feels flat and one-note, not unlike his performance in Much Ado About Nothing. I wonder what Ben Affleck, who has experience with dialogue like this from working with Kevin Smith, could have done with this role?

I get it, though. Victor Levin has been to some crap weddings, and this is his way of settling the score. There’s nothing wrong with mocking the conventions of matrimony or laughing at a couple of sourpusses. The bad news is that this film can’t sustain the essential mix of humor and empathy. The good news? At a hair under 90 minutes, at least Destination Wedding is short.

*Part of that comes from the actor’s persona. Ford is a pretty likable dude, so it’s easy for us to assume he’s innocent. What if somebody like Christopher Walken, who can portray more…let’s say morally neutral characters, played the role instead?

**By “we” I mean “me.” You do you, just maybe don’t commit first degree murder. Perhaps a strongly worded email instead?

***My wife found one aspect of the film particularly hard to believe. She said, ”You can tell a man wrote this, because a woman would never have had the groom’s ex-fiancee at her wedding.”

Tim Brennan
Tim has been alarmingly enthusiastic about movies ever since childhood. He grew up in Boulder and, foolishly, left Colorado to study Communications in Washington State. Making matters worse, he moved to Connecticut after meeting his too-good-for-him wife. Drawn by the Rockies and a mild climate, he triumphantly returned and settled down back in Boulder County. He's written numerous screenplays, loves hiking, and embarrassed himself in front of Samuel L. Jackson. True story.
Tagged: destination weddingdj dallenbachkeanu reevested dubostvictor levinwinona ryder
OnFortCollins.com is a locally-owned and operated directory and information guide for Fort Collins Colorado
Discover the best of Fort Collins shopping, restaurants, night life, breweries, events, business, outdoors, fun, local life, real estate, transportation, jobs, and schools.
Looking for what to do in Fort Collins? OnFortCollins.com has columnists, and bloggers to keep you up to date on the best of Fort Collins, Colorado.