Representation matters. It’s just as important to see some facsimile of yourself at age seven as it is at age 77. It’s a way of shaping your identity, a way of telling the world that you matter. Done right, representation can show you a higher path and provide you with a way to be better.

As a kid, my morals were shaped more powerfully and acutely by comics than they ever were by church.* Spider-Man taught me doing the right thing can suck. It can be lonely and painful, but it’s no less the right thing to do. Superman taught me that consideration for others makes the world not only a better place but also a more bearable place. Those moral lessons imprinted themselves because I could see aspects of myself in those characters. I’ll never web-swing through the concrete jungle of Manhattan, but I always have the opportunity to be decent.

The other power that representation has is normalization. It introduces groups, ideas, and concepts to the “mainstream,” and over time, they cease to be a novelty. From the years 1820 to 1860 a third of all immigrants were Irish. They were initially persecuted and looked upon as lesser, and “No Irish Need Apply” were a common feature of Help Wanted signs. Now? Having an Irish heritage is as big a deal as buying produce. That’s as it should be. 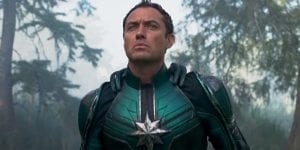 That all brings us to the Marvel Cinematic Universe. It’s an unstoppable cultural juggernaut that, for a long while there, was built on straight white dudes. This may come as a surprise to you, but out of 21 films in the MCU, all but two of them have starred a straight white dude. All but two of them were directed by a straight white guy. One of those films is the newest entry in the MCU, Captain Marvel. Is it going to be like Black Panther, where it’s a cultural asteroid strike that fundamentally changes things? No, but it’s a strong step forward.

Her name is Vers (Brie Larson), and she’s a soldier. Scratch that, she’s maybe the soldier. Her honor and duty is to represent Starforce and the best parts of the Kree Empire. She lives on the Kree home world of Hala, and the Kree have been at war with the Skrulls, a race of shapeshifters. So she fights them. Yet there’s a giant blank in her memories, and maybe there’s more to her life than a centuries-long conflict.

Yon-Rogg (Jude Law) is her commanding officer and mentor, and he mansplains that she needs to keep her emotions in check. There’s a lot of that going around because the Supreme Intelligence (Annette Bening) tells Vers the same thing. Does she? During a conflict with the Skrulls, she’s captured and the Skrulls futz with her memories pretty extensively. She escapes, wipes the floor with about two dozen Skrull soldiers, and peaces out in an escape pod. As far as I can see, her emotions are serving her just fine. 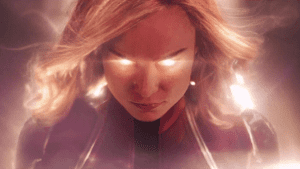 Things get more complicated when Vers arrives on a backwater dump of a planet. We call it Earth. The bad news is that she lands in a hellhole known as Los Angeles. The worse news is that it’s the year 1995, and the inhabitants of this jerkwater burg are not what you would call sophisticated. The even worse news is that a squad of Skrulls, led by the wily Talos (Ben Mendelsohn) have followed her.

All is not lost, because of Nick Fury (Samuel L. Jackson). He’s been riding a desk for a while, working for a shadowy organization known as S.H.I.E.L.D., and Fury seems to be a little lacking in direction. He’ll team up with Vers, also known as Carol Danvers, and she’ll learn a great deal about who she really is, her place in the world, and the truth of things. Oh, and there’s an orange cat named Goose who’s just *chef’s kiss* perfection.

When Wonder Woman was released in the summer of 2017 it was largely viewed as a feminist triumph. The first big-budget superhero film starring a woman and directed by a woman, it did two things in very short order. First, it made a trainload of money and proved that blockbusters viewed through a feminist lens could be critically and commercially successful.** Second, for a brief moment, it made the MCU look just a little irrelevant. I’m not saying the success of Wonder Woman was the primary reason for Captain Marvel. From here, though, if you squint a little bit…

Directed by Anna Boden and Ryan Flack, Captain Marvel is a solid, second-tier film in the sprawling MCU.*** It arrived with gigantic expectations, viewed as being a feminist triumph with the same cultural cachet as Black Panther. Those expectations are unfair. Yes, Captain Marvel has a first act that feels uneven, production design that feels like more of the same from the MCU, and too many winks at the culture of the ’90s. Once the film finds its groove, though, we’re treated to some strong action sequences and decent FX.**** More importantly, Boden and Flack come from the world of independent film, and they have a reputation for strong characterization. I appreciated that they often pump the brakes so we can hang with the characters and get to know them. 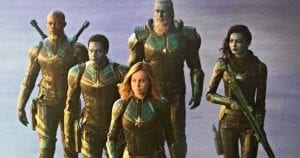 Boden and Flack wrote the script along with Geneva Robertson-Dworet, and it falls prey to an increasingly common problem in the MCU–that of the relentless quips. The worst offender was Guardians of the Galaxy Vol. 2. Time and distance have shown me that Guardians has an unpleasant habit of undercutting moments of genuine emotions with giant-sized snark. Here, it’s not quite as bad, but it too often feels like gags are crammed in instead of being allowed to happen organically. When the script steps away from that and drills down into Carol’s memories and her recapturing of her strength, it soars. It’s not subtle,***** but the movies of the MCU aren’t designed to be subtle. They’re aspirational, and I enjoyed Carol becoming her best self after falling and getting back up, all under her own steam. Her character feels somewhat flimsy at times, and another pass on the script would have likely solved some problems.

If there’s one thing Marvel Studios consistently excels at, it’s casting. They tend to use their main character as a solid anchor, then allow the supporting characters to orbit around them. Captain America is a rock in his own films. He doesn’t change, but things change around him, and he reacts accordingly. As Carol, Brie Larson is in a similar situation. She’s brave, smart, and a touch impetuous. There isn’t an enormous amount of meat to her character, but Larson is an intelligent actor who knows when to lean into the superhero iconography and when to play it more real. She’s joined by an entertaining Samuel L. Jackson, playing a Nick Fury who hasn’t yet become a cynic. I particularly enjoyed Ben Mendelsohn’s layered Talos, and it’s nice that the MCU seems to be moving away from two-dimensional villains.

I don’t think that Captain Marvel is going to strike the culture like a metaphorical Mjolnir. It doesn’t have to since it’s a well-made standalone adventure, as well as a comfortable piece in the tapestry of the MCU. More importantly, as portrayed through a positive feminist lens, the adventures of Carol Danvers take us a little bit further to a day when a blockbuster made by and starring women simply isn’t a rarity. That alone is worth celebrating.

*It also bears mentioning that nobody ever got radicalized by reading Avengers comics.

***It’s not up there with Captain America: The Winter Soldier, Black Panther or Avengers: Infinity War. I’d but it right next to Thor: Ragnarok and Spider-Man: Homecoming.

****I was particularly impressed with the digital de-aging of both Samuel L. Jackson and Clark Gregg. Here, Jackson looks exactly the way he did in The Long Kiss Good Night. Watch closely, and the only giveaway is that his movements are occasionally stiffer and slower.

*****Did we need a major battle set to “Just a Girl” by No Doubt? It’s extraordinarily obvious, and I think the same thing could have been done with more style.

Tim Brennan
Tim has been alarmingly enthusiastic about movies ever since childhood. He grew up in Boulder and, foolishly, left Colorado to study Communications in Washington State. Making matters worse, he moved to Connecticut after meeting his too-good-for-him wife. Drawn by the Rockies and a mild climate, he triumphantly returned and settled down back in Boulder County. He's written numerous screenplays, loves hiking, and embarrassed himself in front of Samuel L. Jackson. True story.
Tagged: anna bodenannette beningben mendelsohnbrie larsoncaptain marvelgeneva robertson-dworetjude lawlashana lynchryan flacksamuel l jackson
OnFortCollins.com is a locally-owned and operated directory and information guide for Fort Collins Colorado
Discover the best of Fort Collins shopping, restaurants, night life, breweries, events, business, outdoors, fun, local life, real estate, transportation, jobs, and schools.
Looking for what to do in Fort Collins? OnFortCollins.com has columnists, and bloggers to keep you up to date on the best of Fort Collins, Colorado.