Am I really the right guy to be talking about representation? I know. I get it. In 2018, Mr. Straight White Dude is better off sitting down, shutting up, and passing the microphone to somebody who’s…well…not also a straight white dude. Still, I’m going to give it a shot, and let’s take a minute to talk about why real representation matters.

As an aforementioned SWD, representation is 100% a non-issue for me. It never has been. I can see a movie, watch TV, or go online, and see hundreds of thousands of examples of SWD’s taking part of the vast tapestry of the human condition. Until fairly recently, I never thought about it, because I didn’t have to.

However, and just as a purely random example, suppose I were an Asian-American? For a long while there, the only people that looked like me in media would be grotesque racist caricatures. Then, in a moment of microscopic progress, I’d start to see Asian faces in professional roles, playing scientists, coroners, or computer experts. It’s still a racist caricature, it’s just the eensiet-weensiest bit more positive. Let’s also be clear, these roles are strictly for supporting players and background extras. Never the lead.

Is it too much to ask to have a film where the main characters are of Asian descent and aren’t kung-fu masters or hyper-brainy nerds? Just…you know…people? In 1993, The Joy Luck Club was released, and it was a touchstone, as it examined the Asian-American experience with a virtually all Asian cast.* It only took *deep sigh* 25 years for a major studio to courageously release another film with a virtually all Asian cast. Is Crazy Rich Asians the film to encompass 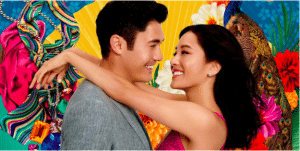 the entirety of the Asian and Asian-American experience? Hell, no, but it is a delightful romantic comedy that should be seen on the big screen.

You know how in many rom-coms, the lead is a hot mess that learns how to Just Be Herself** in order to win the love of a guy? Blessedly, that doesn’t happen here. We’re introduced to Rachel Chu (Constance Wu), an economics professor in New York City. She’s doing well for herself, and she’s been dating Nick Young (Henry Golding) for about a year. Nick is a good guy, and he comes from a family in Singapore that he describes as “comfortable.”

Nick’s best friend Colin (Chris Pang) is getting married, and Nick is the best man. This is a perfect opportunity for him to introduce Rachel to his family. However, things get a tad awkward when Rachel discovers that Nick’s family is rich. When I say rich, I mean they’re the 0.001% of the 1%, an old-money family with real estate holdings throughout the world.

To say that all of this is new to Rachel would be a gargantuan understatement. Things get more awkward upon meeting Nick’s mother. This is Eleanor (Michelle Yeoh), a woman of perfect bearing and icy disposition. She’s less than thrilled with Rachel for a few reasons. First, Rachel is simply not a part of the same socioeconomic class as the Young family. 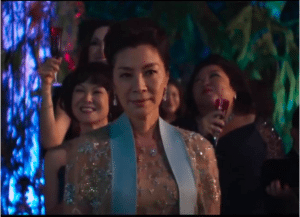 More importantly? Rachel’s friend Peik Lin (Awkwafina) spells it out for her. The Youngs look at Rachel as just a Chinese-American, a lesser person than pure Chinese.

At least Rachel has allies within the family. Astrid (Gemma Chan) is Nick’s sister, and she immediately bonds with Rachel. As the wedding preparations get underway, Rachel must overcome unfamiliar customs, a phalanx of bitchy bridesmaids, an unfriendly mother, and a possibly mortal wound to her relationship. Will everything end happily ever after?

Let’s take a quick moment for Straight White Guy to mention something. Crazy Rich Asians is partially being marketed as a victory for diversity, which naturally means people will quibble about just how diverse it really is.*** It’s unfair that a fun romantic comedy is forced to shoulder the massive burden of representation for Asian-Americans and Asians of all sorts. This film can’t do that and shouldn’t be expected to do that. 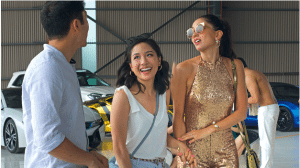 People shouldn’t let the perfect become the enemy of the good. Any forward momentum is good.****

Speaking of good, the more important detail is that Crazy Rich Asians is rock-solid entertainment. While I’m not the world’s biggest fan of rom-coms, I’d be lying if I didn’t say that director Jon M. Chu has made a fizzy, sparkly, thoroughly enjoyable film. His movie has infectious energy, and I constantly wondered if it would transform into a full-on musical. There’s a montage in the film of the characters enjoying a feast of street food, and this was a special kind of torture for me as I saw images of delectable foodstuffs while being stuck in a theater smelling stale popcorn. 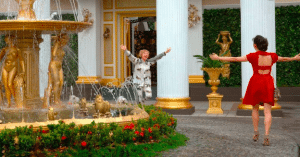 The screenplay by Adele Lim and Peter Chiarelli does an awful lot right. Instead of painting the wealthy family as a pack of cartoonish villains, the divisions are more sophisticated. Everybody in the film is an individual with a distinct point of view, and when tension arises, it’s because of class issues and the feeling of being an outsider in the country where you or your parents came from. All of this is done with breezy and bouncy wit.

The cast gets that and takes off running with it. As the leads, Constance Wu and Henry Golding have sweet and natural chemistry. Wu’s Rachel is smart, determined, and charismatic, while Golding is likable — though slightly too perfect. They’re likable and fun, but they exist to be the solid hub around which more extreme characters can spin. The mighty Ken Jeong shows up for a few scenes to be certifiably insane. The MVP of the cast has to be Awkwafina as the goofy Peik Lin. She’s got cutting wit and a willingness to fearlessly throw herself into the film’s shenanigans.

Crazy Rich Asians is a huge amount of fun, and it deserves to be a hit. It revels in excess, joyously so. Studios frequently learn the wrong lessons from successful movies. Here, the lesson is simple. An American audience can identify with a love story, and a kooky comedy about how it’s hard to fit into your partner’s family. It just doesn’t have to always be about white people. That’s what representation really is.

*I learned a thing! The Joy Luck Club apparently has a very divisive reputation. Check out this excellent article about it.

**Usually involving a makeover to have her become conventionally beautiful. Thanks, Hollywood, no body shaming issues here!

***Which you can read more about here.

****This is not unlike the percentage of annoying Bernie Sanders supporters who refused to vote for Hillary Clinton despite agreeing with 90% of her policies. Don’t be that guy.

Tim Brennan
Tim has been alarmingly enthusiastic about movies ever since childhood. He grew up in Boulder and, foolishly, left Colorado to study Communications in Washington State. Making matters worse, he moved to Connecticut after meeting his too-good-for-him wife. Drawn by the Rockies and a mild climate, he triumphantly returned and settled down back in Boulder County. He's written numerous screenplays, loves hiking, and embarrassed himself in front of Samuel L. Jackson. True story.
Tagged: adele limawkwafinachris pangconstance wucrazy rich asiansgemma chanhenry goldingjon m. chumichelle yeohpeter chiarelli
OnFortCollins.com is a locally-owned and operated directory and information guide for Fort Collins Colorado
Discover the best of Fort Collins shopping, restaurants, night life, breweries, events, business, outdoors, fun, local life, real estate, transportation, jobs, and schools.
Looking for what to do in Fort Collins? OnFortCollins.com has columnists, and bloggers to keep you up to date on the best of Fort Collins, Colorado.