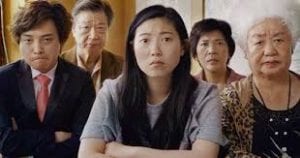 One of the most prominent sections of the American Cancer Society’s website is the Treatment and Support page. There, you’ll find a host of useful information regarding the feelings both patients and caregivers experience during and after treatment. Understandably, fear, depression, and anxiety are all cited as normal responses. 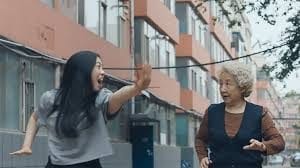 Bear in mind that the “normal” response isn’t necessarily shared throughout the world. Some cultures have approaches that might initially seem baffling to us Americans, but a little curiosity and empathy can provide us with a way into another approach. Years ago, Lulu Wang went through an experience with her family. Her film, The Farewell, examines how a family deals with the end, and it does so with great heart and humor.

We meet Billi (Awkwafina), a Chinese-American woman trying to start a writing career in New York City. Things aren’t going well, as she’s just been rejected for a Guggenheim Fellowship. Like the vast majority of creative types, she’s reached what looks like a wall, and she doesn’t know how to get past it.

Things aren’t much better at home. Billi keeps a cool distance from her father Haiyan (Tzi Ma) and her mother Jian (Diana Lin). They ask her how she’s doing, how her career is going, and if she’s met a nice young man yet. We can sense that these conversations have happened many, many times in the past.

Her grandmother, or Nai Nai (Shuzhen Zhao), firmly has Billi’s back. They talk often, and we see that despite advancing age, the old woman is a spitfire. We also see that she tires easily and has a cough that lingers. She thinks the problem is just a persistent cold. Her sister Little Nai Nai (Lu Hong) knows the truth, that Nai Nai has stage four lung cancer. The family has a plan. 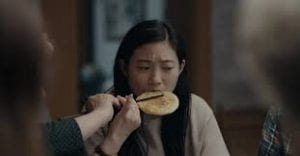 Through the manipulation of test results and deception that would make the CIA proud, Nai Nai is told her medical findings are nothing more than benign shadows. Not so coincidentally, Billi’s cousin Hao Hao (Han Chen) is marrying Aiko (Aoi Mizuhara), and the upcoming wedding is an excellent excuse to get the family together in China. It’s all in service of an elaborate lie, a way for the family to see Nai Nai one last time. However, Billi has an American point of view, and she’s been ordered by the rest of the family not to reveal the truth to Nai Nai. Will she tell her grandmother the truth? Should she?

I was fascinated by The Farewell and by Lulu Wang’s judgment-free direction. Her command of tone is highly impressive, and she’s made a film about the end of life that’s frequently funny and warm.** There are no cliches, no “wacky” relatives, simply a family coming together. We see scenes play out naturally, and it’s as if Wang is a neutral yet compassionate observer, content to examine the different points of view.

I was also fascinated by the idea of a good lie. By not telling Nai Nai the truth until nearly the end, the family bears the heavy emotional burden instead of Nai Nai herself. Wang’s screenplay intelligently portrays the various family dynamics as well as the larger cultural differences between China and the United States. By immersing us in the lives of these people, Wang provides us with a point of view that’s humane and understandable. She also excels at efficiently portraying years of history between family members with a glance, a nod, or an intonation.

Before you come to the conclusion that the film is BummerFest 2019, I should mention that there’s a great deal of sneaky humor as well. I loved the total lack of chemistry between Hao Hao and Aiko, the drunken wedding toasts that went on way too long, and the petty arguments over the menu. 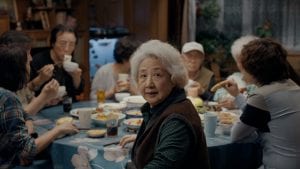 Ensemble films are notoriously difficult to make, and there’s always a risk of either sidelining too many characters or sketching them in overly broad strokes. Wang never allows that to happen here, and every member of the cast has a moment to shine. There are two standouts in the cast, and the first is Awkwafina as Billi. After films like Crazy Rich Asians, she established her bonafides in broad comedy. Here, she proves herself to be an accomplished dramatic actor. Watch the scenes where she’s with her parents and she slouches like a snotty 17-year-old, or the moments with Nai Nai as her expressions rapidly shift between joy and grief. Speaking of Nai Nai, Shuzhen Zhao absolutely destroys as the family matriarch. Whether she’s making fun of Billi’s butt or directing a pilgrimage to the gravesite of her husband, she’s a force of nature who can’t be more than five feet tall.

The Farewell is a warm hug of a movie, providing a point of view I hadn’t considered with characters who are confidently well-drawn. A combination of observational direction, perceptive writing, and a talented cast make this film one of the year’s best.

*That’s presuming the cancer treatment isn’t bankrupting them. In that case, blind panic seems like a rational response.

**Wang also shoots a number of moments involving food, and she’s made some of the most delicious-looking scenes I’ve ever seen.

Tim Brennan
Tim has been alarmingly enthusiastic about movies ever since childhood. He grew up in Boulder and, foolishly, left Colorado to study Communications in Washington State. Making matters worse, he moved to Connecticut after meeting his too-good-for-him wife. Drawn by the Rockies and a mild climate, he triumphantly returned and settled down back in Boulder County. He's written numerous screenplays, loves hiking, and embarrassed himself in front of Samuel L. Jackson. True story.
Tagged: aoi mizuharaawkwafinachen handiana linlulu wangthe farewelltzi mazhao shuzhen
OnFortCollins.com is a locally-owned and operated directory and information guide for Fort Collins Colorado
Discover the best of Fort Collins shopping, restaurants, night life, breweries, events, business, outdoors, fun, local life, real estate, transportation, jobs, and schools.
Looking for what to do in Fort Collins? OnFortCollins.com has columnists, and bloggers to keep you up to date on the best of Fort Collins, Colorado.