My neighbors Jennifer and Paul are absolutely delightful people. Our kids play together, and we’ve made it a point to hang out whenever possible. Paul is a ridiculously talented baker, and Jennifer quietly sabotages the Minnesota Nice caricature with her vicious sense of humor. They’re great…except for one teensy-weensy thing.

A while back, we’re all having dinner together. As they’re from Minnesota, I’m asking questions about the state. Inevitably, the subject of Prince comes up. I mention to them that I’m a big fan of His Purple Majesty. With a sneer, Jennifer responds with, “Prince is so overrated.”

Guys, I was shook.

Look, I get it. Art is subjective, and I guarantee that all of us dislike an artist that’s considered to be in the top tier of entertainers. However, there’s a reason certain artists are considered to be GOATs. Artists like The Beatles. Elvis. Queen. In particular, Queen is a band that everybody likes. Christian conservatives like Queen. Liberal atheists like Queen. The guy who replaced the transmission in your car likes Queen, and the woman who turned you down for a loan likes Queen. That is as it should be. 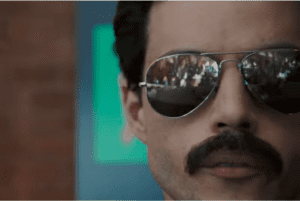 I asked friends online exactly why Queen remains a beloved and iconic band. I was told their versatility opened the door for other musicians, that Brian May was a fantastically innovative guitarist, and that Freddie Mercury had the greatest rock voice of all time and showmanship that was second to none.* They were a band that truly stood apart, so if you were going to make a movie about them, it would also need to stand apart. Unfortunately, the new film Bohemian Rhapsody does not do that.

It’s the 1970’s, and we’re introduced to young Farrokh Bulsara (Rami Malek), who’s pursuing a career in the exciting and fast-paced world of baggage handling at Heathrow Airport. His family are Parsi refugees, and he’s getting a little tired of dopey white people yelling, “Hey, Paki!” at him all the damn time. There must be more to life than hauling around luggage, and Farrokh is certain he’ll find his true calling.

Conveniently, he finds it in the very next scene! While at a local nightclub, he sees a performance of the band Smile. The lead singer is kind of a drip, which makes the band merely okay. After the show, the lead singer announces that he’s quitting. This is a big bummer for guitarist Brian May (Gwilym Lee) and drummer Roger Taylor (Ben Hardy). The guys are despondent for nearly five seconds when, conveniently, Farrokh arrives and offers to be their new frontman. Moments later, bassist John Deacon (Joseph Mazzello)** seemingly materializes out of thin air to join the band, which is also highly convenient.

With all the elements in place, the guys take the stage for their first performance. Considering it’s their first performance ever, you’d expect the band to be a little shaky, with notes of the greatness to come. Nope! Other than a slight mishap with a microphone stand, the guys proceed to absolutely whip ass, and the crowd instantly loves them. They change the name of the band to Queen, go on tour, and sell their dilapidated van to finance an album.

Becoming legendary rock icons seems to be as difficult as making your morning coffee*** since Queen quickly lands a record deal with EMI Records and a tour throughout the United States. There’s even a montage of the guys yelling out, “Hello, Cleveland!” and “We love you, Denver!” Along the way, Farrokh changes his name to…wait for it…Freddie Mercury. He also falls in love with Mary Austin (Lucy Boynton) while coming to terms with his bisexuality. The film even helpfully includes a scene where Mary says, “You’re gay, Freddie,” and he clarifies by saying, “I think I’m bisexual.”

There was talk about a warts-and-all biopic of Queen, talk about the impish Sacha Baron Cohen playing Freddie Mercury. But that’s not what we got. With Bohemian Rhapsody, what we have here is a dumb and obvious film that features a number of strong performances and Queen’s astounding music. It’s a highly entertaining bad movie that often works in spite of itself.

I suppose we’re lucky to have gotten this much. Bryan Singer directed most of the film, before being fired during production.**** Dexter Fletcher came on-board to finish up the last two weeks of shooting, and much like the misbegotten Justice League, the film never feels like a cohesive whole. It needed a filmmaker who could tap into the operatic intimacy of Queen, the moments of gigantic triumph and torment. Instead, it feels like the film cracks open Rock Biopics for Dummies, and starts checking boxes. A lead singer experiencing important emotional moments while creating accompanying hit songs? Check. The lead singer spirals out of control while the rest of the band tells him to slow down? Check! A break-up that takes place in the rain? Check, damn your eyes, check.

The timid direction might not have mattered so much if it hadn’t been partnered with a rickety screenplay by Anthony McCarten. For example, when a character says out loud, “We’ll mix genres and cross boundaries,” you know subtlety is not a priority. In addition to the tsunami of clichés on display, there are a couple of other sizable problems. First, the script gives us a pretty good idea of what makes Mr. Mercury tick. Not so much with the rest of the band. Brian May is levelheaded and concerned, Roger Taylor occasionally pushes back against Freddie’s excesses, and John Deacon looks on wryly. Despite lip service from the script that all of them contribute to the greatness of the band equally, we’re shown that Queen is Freddie Mercury and his Amazing Friends.

The other issue? Consider that we have here a band comprised of an art student, an astrophysicist, a dentist, and an electrical engineer. They were highly intelligent and focused. Additionally, Mercury had a vast range of interests, everything from Elvis to opera and Victorian England. Oh, and sex. Lots of interest in sex. With all of those elements, the cerebral, the sexual, and more, how does all of that affect the creation of some of the greatest music ever? How do Freddie’s queer sensibilities play into it? We never find out, since the film portrays the act of creating art as fast and easy. There’s no struggle, just simplicity.

With all the venom I’ve just spewed, you’d be forgiven for thinking I hated this movie. Not the case, and that’s primarily due to the cast. In an amusing piece of stunt casting, Mike Myers appears as a music executive convinced the song “Bohemian Rhapsody” will never be a hit. Despite having very little to do, I liked Gwilym Lee as the warm Brian May, Ben Hardy as Roger Taylor, and Joseph Mazzello as John Deacon. If nothing else, they’re the spitting image of the real people.

In the suicide note of the doomed Kurt Cobain, the rocker wrote that “…it doesn’t affect me in the way in which it did for Freddie Mercury, who seemed to love, relish in the love and adoration from the crowd, which is something I totally admire and envy.” There’s a scene where Rami Malek’s Freddie is performing, and the crowd is singing along with him. His eyes widen like he’s learned a profound truth. He belongs up there, in front of all those people. Malek is very good in the role, and he’s even got the prosthetics in place to replicate Freddie’s Simpsons-esque overbite. His performance is confident and campy, and he’s able to portray the vulnerability and yearning hidden behind the bulletproof showmanship.

One of the best performances of pretty much anything was Queen’s 1985 set for the Live Aid concert. Give it a watch and you’ll very quickly see a band that doesn’t need pyrotechnics, graphics, or gimmicks. It’s just four guys on a stage — four guys playing for a tight 21 minutes, and a frontman effortlessly controlling a crowd of more than 100,000 people. The power and artistry from Queen are legendary. It’s a shame that Bohemian Rhapsody fails to live up to their legacy. At least we’ll always have Wembley Stadium.

*There was also some talk about Flash Gordon and Highlander, which I appreciated.

**Fun fact — Mazzello was one of the annoying kids in Jurassic Park. A subplot about a T-Rex chasing Queen would have improved this movie enormously.

***As they say in the online ScreenRant Pitch Meetings, it’s super easy, barely an inconvenience.

****Singer was fired due to personality clashes with star Rami Malek and a weird predilection for vanishing from the set for long periods of time.

Tim Brennan
Tim has been alarmingly enthusiastic about movies ever since childhood. He grew up in Boulder and, foolishly, left Colorado to study Communications in Washington State. Making matters worse, he moved to Connecticut after meeting his too-good-for-him wife. Drawn by the Rockies and a mild climate, he triumphantly returned and settled down back in Boulder County. He's written numerous screenplays, loves hiking, and embarrassed himself in front of Samuel L. Jackson. True story.
Tagged: anthony mccartenben hardybohemian rhapsodybryan singerdexter fletchergwilym leejoseph mazzellolucy boyntonmike myersrami malek
OnFortCollins.com is a locally-owned and operated directory and information guide for Fort Collins Colorado
Discover the best of Fort Collins shopping, restaurants, night life, breweries, events, business, outdoors, fun, local life, real estate, transportation, jobs, and schools.
Looking for what to do in Fort Collins? OnFortCollins.com has columnists, and bloggers to keep you up to date on the best of Fort Collins, Colorado.