Drink Some Joe To Get Out of the Red

Rosacea is a skin condition characterized by redness and often small, red, pus-filled bumps on the face. Over 3 million people are estimated to have rosacea and the signs and symptoms may flare up for a period of weeks to months and then diminish for a while. Rosacea can be mistaken for acne, an allergic reaction or other skin problems.

The cause of rosacea is unknown, but it could be due to a combination of hereditary and environmental factors. A number of factors can trigger rosacea by increasing blood flow to the surface of your skin. Some of these factors include: 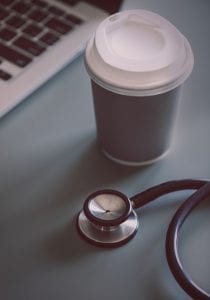 You are most likely to have rosacea if you:

New research suggests that, contrary to popular belief, drinking coffee might be a preventive treatment for rosacea. A national nurses’ study examined the rosacea risk and dietary habits of nearly 83,000 women, found that consuming caffeine from coffee may protect against the risk of developing rosacea. Coffee drinkers who consumed as little as 100 milligrams (mg) of caffeine a day saw a 4 percent drop in rosacea risk. An 8 ounce cup of coffee typically has about 95 mg of caffeine, and a venti Starbuck’s coffee has around 400 mg of caffeine.

Researchers are not sure why caffeine is beneficial to preventing rosacea, but possible reasons include an antioxidant effect or caffeine’s impact on hormones such as adrenaline and cortisol.  Unfortunately, no other caffeinated beverage confers the same benefit as coffee for rosacea prevention.  At this point, research only points to an association, not causation, so no recommendations for coffee consumption have been made.

There is likely going to be further research into the association between rosacea and coffee, so stay tuned!

Andrea Groth
Andrea wants to live in a world where the neighborhoods are walkable, bike lanes are plentiful, and the food is fresh, delicious and readily available. A 20-year veteran of the health and wellness industry, she started her career in the fitness industry while earning a master’s degree in Exercise Science and Health Promotion, and then on to the burgeoning field of worksite wellness. Andrea has competed in collegiate level soccer, worked as a personal trainer, fitness instructor, wellness coach, and master trainer, climbed 14ers, and completed cycling centuries and metric centuries. All of these experiences give her the opportunity to view well-being from many different perspectives. When she’s not helping others to be their healthiest self, you can find her at a farm to table restaurant, down dogging at the yoga studio, or experiencing the Colorado landscape on a bicycle, snowshoes, cross country skis or on foot.
Tagged: Coffeehealthrosaceastudy
OnFortCollins.com is a locally-owned and operated directory and information guide for Fort Collins Colorado
Discover the best of Fort Collins shopping, restaurants, night life, breweries, events, business, outdoors, fun, local life, real estate, transportation, jobs, and schools.
Looking for what to do in Fort Collins? OnFortCollins.com has columnists, and bloggers to keep you up to date on the best of Fort Collins, Colorado.