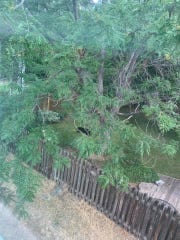 A young black bear wandered into a backyard of a home in Fort Collins, causing 4 schools in a 2 mile vicinity to go on lockout, including Rocky Mountain High School, Webber Middle School, Johnson Elementary School and Olander Elementary School.

A report from the homeowner, courtesy of the Coloradoan, said, “I opened up my blinds to go out and water, and I thought, ‘How did a big black lab get over my fence and into my backyard?”’ said the homeowner, who wished not to be identified. “I had never seen a bear in this area of town. Then I noticed it was a bear. It was crazy.”

The school sent out an email to parents about the lockout early in the morning, letting them know that nobody could enter or exit the school. The lockout was lifted shortly after when Colorado Parks and Wildlife officials tranquilized the 125-pound yearling male bear. The bear had run up a tree, but the Officials managed to get it safely out of the tree and onto the tarp while tranquilized.

CPW spokesperson Jason Clay said the bear will be tagged and released in the Laramie River Valley in the far northwest corner of Larimer County. He said it is standard practice to tag bears when they are captured.

Neighbors of the homeowner speculated that the apple tree in the backyard may have enticed the bear to climb over the 6-foot tall fence.

Kaylee Huntley
Kaylee was raised (but not *technically* born) in Colorado. She graduated from Regis University with a bachelor of arts in English. During her time at Regis she worked as a teaching assistant in a freshman classroom setting and in the writing center helping students on a variety of topics. While there, she discovered Cura Personalis, or care for the entire person, leading to her love of feminism and desire for equal rights for all. Kaylee spends her time reading, writing, and debating.
Tagged: backyardbearlockout
OnFortCollins.com is a locally-owned and operated directory and information guide for Fort Collins Colorado
Discover the best of Fort Collins shopping, restaurants, night life, breweries, events, business, outdoors, fun, local life, real estate, transportation, jobs, and schools.
Looking for what to do in Fort Collins? OnFortCollins.com has columnists, and bloggers to keep you up to date on the best of Fort Collins, Colorado.