What is the neighborhood coming to at Jessup Farm Barrel House

When it comes to a fabulous neighborhood tap house, I am the luckiest beer geek. Within walking distance, Jessup Farms Barrel House is a real treat for my feet and my craft beer loving taste buds.  In 2015, The Barrel House was literally born in a barn that is 133 (give or take) years-old. The 3,000 square-foot restored barn sits on the 13-acre Jessup Farm Artisan Village with other shabby-chic businesses like Bindle Coffee, The Farm House at Jessup Farm, and Cacciatore at Heller’s Kitchen; just to name a few as a point of reference. All of which are next to Bucking Horse development just North East of Drake and Timberline Road. 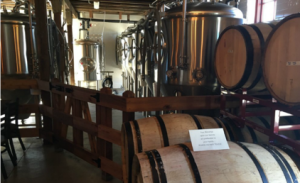 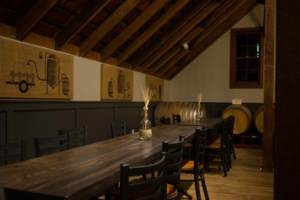 As I walked into the first floor of the converted barn, the whiff of fermenting barley greeted me on the way past the blending and barrel storage area.  Upstairs, I found their neighborhood communal tables, which are meant for the gathering, charming and inviting.  All year round, the outdoor beer garden is complete with cornhole and other patio games. Great to see they are bike, kid, and dog-friendly as well. 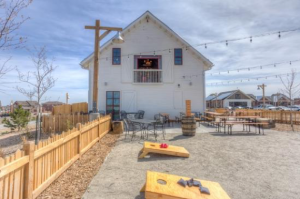 My sampling included Tequila Train Delay 6.0%, Train Delay 5.0%, and Honeydew It 6.1% ABV.  Because I am a bit of sucker for higher alcohol percentage, the Honeydew It had my name all over it. This American wheat beer with honeydew melon juice pours cloudy with the straw to light amber color which takes on a resemblance of a German-style Hefeweizen.  In other words, Honeydew It is farmhouse heaven in a glass. 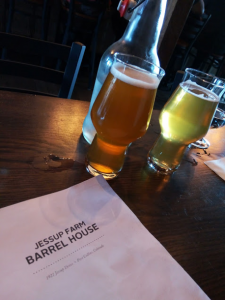 Barrel aged beer “takes the robust characteristics from the barrels blended to bring out the complexities and nuances of the flavors“.  Prepare to be wowed with a deliberate and sophisticated selection of styles that range from Munich-style pale lager, barrel-aged dark quick sour, oak-aged red ale, whiskey barrel-aged strong ale, and wine barrel-aged wheat ale among other fine crafted beers. Drop by to pick up a bomber or a growler fill on the way back to your neighborhood.

Noelle Maestas
Noelle Maestas, a Colorado native, earned a Bachelor of Arts degree in Communication from Regis University in Denver. By day, she is a content creator and marketing geek who has been contributing to and editing various marketing blogs and social media content for more than 5 years. Having an entrepreneurial spirit, she is also the creator/editor of her own fitness blog because it was a good idea at the time. Living in Fort Collins for over 20 years, beer has been the muse that inspires her to savor the best that Northern Colorado has to offer. Together with her husband, who is a GIS blogger and a beer-loving Canadian, they have become a recognized couple in some of Fort Collins finest beer establishments with several like-minded friends. When she isn't riding her bike through Old Town, Noelle can be found volunteering at beer festivals in Fort Collins.
Tagged: Barrel-agedbarrel-housebeer stylecollaborationJessup farms
OnFortCollins.com is a locally-owned and operated directory and information guide for Fort Collins Colorado
Discover the best of Fort Collins shopping, restaurants, night life, breweries, events, business, outdoors, fun, local life, real estate, transportation, jobs, and schools.
Looking for what to do in Fort Collins? OnFortCollins.com has columnists, and bloggers to keep you up to date on the best of Fort Collins, Colorado.