The Courage to Question 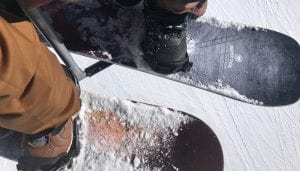 I have a confession. I haven’t been completely honest with you lately.

I spent my last blog explicating a story about some guy in camo pants that would, quite literally, run into me in the singles line of my favorite chairlift. A guy that would inevitably save me from the digital dead zone of online dating. A guy who, at first take, would appear to be completely random, until we’d both divulge the calculated decisions we had made to get us into that same lift line on that same mountain on that very same day, and none of it would seem so random after all.

As much I want to chalk this up to fantasy (because, let’s be honest now, it is quite the fantasy), my confession is that camo pants is a very real-life guy. He is a walking, breathing, handsome human that has managed to surpass Whole Foods in my list of favorite things (in case you’re confused by this comment, it means that he’s sitting in a generally hard-to-reach number one).

And herein lies the paradox that is dating.

He and I. We are easy, which is perfectly epitomized by that casual chance encounter in a lift line that the two of us have visited – without running into anyone noteworthy – hundreds of times before. We are so easy that I often have to pinch myself to remind me that it’s real. Because I had convinced myself, so many years ago, that it should be so damn hard. And, we, us, we are the furthest thing from hard.

Because you are both simultaneously, and independently, climbing the rungs of pre-dating to open dating to exclusive dating to full-blown relationship without a clear understanding of how the other person even defines those terms in our trying times of 2019. So, you are forced to engage in open conversation with the utmost fear that you might just scare off or piss off or something off this human that you ultimately just want to like you (like really like you).

Because there is that moment (well, I guess not ever having that moment would be a clear indication to abort the mission). But, you know, when all of a sudden you’ve gone from “Well, isn’t this fun?” to “Uh-oh, I am feeling this person.” Yeah, that moment.

Let me clarify for any of you who aren’t tracking.

We had spent three nights in a row together and on that inevitable return to solidarity – because four nights in a row breaks into some type of savage relationship force field – truth be told, I already missed him. The way he made me laugh while I burrowed myself deeper into his chest, knotting my legs between his limbs, an invitation for him to squeeze me more tightly into his being. And how I looked up to stare into his eyes, to re-memorize the shape of his smile, only to be drowned in the intoxication of his kiss. I already missed his hands that traveled through my hair and down my cheeks to hover on the small of my back while he talked to me about selling art and buying rental properties and building campfires underneath the stars before he’d sidebar to chastise me for not drinking enough water or regularly tuning my snowboard.

In that moment, the missing, I am hyperaware that he still has so much to teach me about his favorite brand of pickles and the corruption of the maple syrup industry and the evolution of punk rock in the 80’s. And I still have so much to teach him about my favorite brand of pickles and the secret of Sun Valley, Idaho and the dynasty that is Duke basketball. We’ve logged hours upon hours of uninterrupted storytelling, and yet, it’s still not enough (bold, vulnerable, unedited fact: I hope it never is).

So, there is the acknowledgement that I’m now spoiled by his presence – so deep into twitterpation that a night alone, a state that has been my comfortable existence for the last two years, now feels unbearably uncomfortable. Because my body begs to wake up as the small spoon, his lips grazing my forehead in the morning to, once again, remind me that he’s real (for the record, I much prefer this method over the pinching). I’ll relish the days that, sans alarm, we race off together towards the mountain. And, during the rest of the week, when he jumps at that all-too-familiar iPhone alert that beckons him to work, I will giggle as I beg for just one more minute of his heat inside my college-sized bed that’s nestled into my tin can that I call home.

And, who am I? Or, even more titillating of a question, what is this?

Because I am drowning in his goodness. I am giving myself permission to need him. I am opening myself up to one of those deep connections that taunts our insecurities with the possibility of heartbreak. Even now, especially now, all of these words escape my fingers in an equal state of bliss and trepidation. Because this guy, this altogether very real guy, has yet to friend zone me or ghost me or barter his sexual prowess with the words, “I like you, but I’m just not ready.”

And, despite all this realness and all the work that I have invested in myself for the last two years – the confidence that I have sharpened through a handful of agonizing decisions – I am still questioning my vulnerability. I have found myself second-guessing my own heart’s desires and have contemplated silencing their whispers (because I just want him to like me, like really like me).

Then, it will hit me (like it always does): I do not get what I want from soldiering my silence. I am met by another when I speak my truth and he embraces it. Any mockery of my speech – any thoughts that are drawn towards my words being too much or too little or too ridiculous – exist inside a person that doesn’t deserve my openness. So, in exposing myself to him, I have also been forced to embrace myself. Again. And again. And again. So as not to become the version of me that is silenced, the Stephanie 1.0 that didn’t know her needs or desires or worth. I have been challenged to keep the integrity of Stephanie 2.0, the one who preaches to live everyday as the most unapologetic version of herself (newsflash: easier said than done).

So, weeks into that aforementioned dating ladder, I am compelled to initiate the infamous conversation. I, Stephanie 2.0, engage (after a longer-than-I’d-like-to-admit pep talk).

The words escape my lips as my stomach cascades across a set of metaphorical uneven bars. We are lying in bed, staring without hesitation into the deep brown color of each other’s eyes. Our knees, like magnets, slide effortlessly to touch. To be present with one another, that is easy; meanwhile, the tension that surrounds this question is nothing less than nauseating.

What the last two years of work are giving me in this seemingly unbearable moment of silence – the quiet buffer that exists between question and answer – is the ability to arrive in this space without expectation. There is a desirable outcome, of course, but I have both lied to myself and been lied to by others enough to recognize that this question is not the birthplace for a deliberation. I am not entering this conversation with bullet points that will ensure some type of victory.

In the moment, I recall thinking that nothing could be worse than my sickened stomach sitting inside of that silence.  In hindsight, I realize that what would have been worse would be to never have asked the question at all. To parade around as if I am fine with the not knowing. To mask my voice as a means of assuming that I am, in some absurd fashion, pleasing him.

Because there I go again, creating a story for somebody else. This time, I have convinced myself that no man wants to be met with such a question. And, what I need to be telling myself (what I am now telling myself) is that any person – period – worth having in my life is going to embrace every inch of this inquisition.

And, he did. Embrace it. Every damn inch of it. Against all of my ill-imagined assumptions. He met me with hours of honesty, the best and worst parts of it, until we found ourselves freely coasting smooth waters after swimming, what felt like, upstream of a rather unpleasant and intense current.

I just want to make you feel lighter.

The words roll off of his tongue. I am awestruck at the beauty that exists in stringing together such a simple set of syllables. He wants to help carry me. With one single sentence, he has summarized every dream I’ve ever written, every brave thought about partnership that’s ever escaped my lips.

Inside the safe space that we are creating for ourselves, the honest place that we are pruning as the foundation for an us, we chose the courage to question and the humility to answer. I’d be lying if I said that it doesn’t feel damn good to call camo pants my boyfriend, but the weight of this word lives inside our mutually agreed-upon definition of such a term. Together, we are making each other lighter.

So, he and I, we are easy. And, our easiness, our attraction to each other because of all the little things that just feel so damn effortless, propels us to confront those conversations that can often times be so damn hard.

I don’t have it all figured out yet. But, this guy, he makes me want to try. Because what I do know is that I like him, like really like him.

Stephanie Kemp
Stephanie is a road warrior, adventure seeker, and brand builder. She grew up in the mountains of Colorado and after spending nearly a decade between the PNW and the east coast, she’s proud to once again be calling Colorado home. Well, home for now. Stephanie recently bought an Airstream with the intention of living a more minimalistic and nomadic lifestyle. After logging over 20k miles in her car last year, chasing rock faces in the summer and powder days in the winter, she realized that life could be a hell of a lot simpler if she could carry her house with her on these adventures. In 2017, she started her own marketing agency, Sleigh Creative, to take control of her freedom. As a freelance creative director and brand strategist, she spends a lot of days playing and even more nights working. In all things, be it work or play, she seeks to inspire people to the life of never settling. You can follow along with her journey on Instagram, @by.stephanieleigh, and through her self-titled personal blog.
Tagged: communicationdatingskisnowboard
OnFortCollins.com is a locally-owned and operated directory and information guide for Fort Collins Colorado
Discover the best of Fort Collins shopping, restaurants, night life, breweries, events, business, outdoors, fun, local life, real estate, transportation, jobs, and schools.
Looking for what to do in Fort Collins? OnFortCollins.com has columnists, and bloggers to keep you up to date on the best of Fort Collins, Colorado.