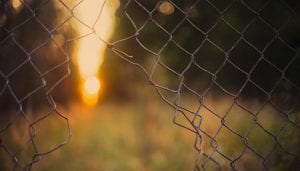 I have spent the last month in a state of increased awareness about my absolutely terrible ability to set boundaries. Or, maybe the problem is that I’m really good at setting them, or knowing what they should be if I were to set them, and I have an absolutely terrible time of following through with them. Whichever the case, I am currently hypersensitive to the fact that boundaries are a necessary part of respecting my self-worth, and on a traditional grading scale, I’d over-generously give myself a D+ in this category.

Before I expand on this reflection, I feel it necessary to describe myself from a third-person perspective. Most of my friends (and by most, I mean all) would say that I am overtly outspoken (to a fault). I have a tendency to say exactly what I am thinking, and I do not shy away from tough face-to-face conversations. I am a sucker for a good debate. I yearn for relationships that challenge me to question. And, I can haggle a vehicle trade-in with any used car salesman. Short story, you would be hard-pressed to ever hear my name and the word “intimidated” in the same sentence.

Without going into too much detail, I think it’s important to also unpack my previous lives (I’m currently on number nine, in case you were wondering). I grew up an athlete. If you were to ask any of my high school coaches to describe my playing style, they would tell you about my undeniable aggression and my constant communication. This passion spurred me to become a high school teacher and varsity basketball coach for nearly the first decade of my professional career. If you were to ask any of my former students or players to describe my respective teaching and coaching styles, they would most certainly tell you about my desire to always keep it one hundred (also known as, keeping it real, for any of you who are not on trend with current high school lingo).

This confidence, however, never translated into my personal life. More specifically, my romantic life (or lives). I spent a lot of time convincing men that I was worthy of their love. And, please read that statement exactly as it is written: a lot of time, not a lot of men. Not because I care about your perception of me and my number of romantic partners, but because I actually see my abysmal dating roster from my teens and early twenties as a detriment to my adult self (you can’t know what you want or need until you’ve been witness to a lot of what you don’t want and don’t need).

I grew up in a divorced home, and I think it is extremely difficult (maybe even impossible) for single-parent children to conceptualize the idea of love. You are constantly battling this picturesque movie version that lies just beyond the edge of your fingertips in direct contrast to the one example that you know as being real, which ultimately ended in brokenness (for lack of a better term). So, I will speak for myself by saying that, because I did not have this model of love day in and day out, it allowed for me to create my own version of a word that requires far greater introspection than a 16-year-old Stephanie could cognitively comprehend.

But, lie to me. Step outside of integrity. And, we are done. Termination. Abort. Over. Finished.

To clarify, let’s revisit exhibit B (he made a cameo a few short weeks ago in a blog I wrote about online dating on the road, which you can read here). Let’s just hypothetically say I didn’t stop hanging out with him (and by hypothetically, I mean real life, of course). After he admitted to liking me, but being unsure. After he admitted to being a tease. After he bro’ed me for the first, second, and third times. Yep, hi, hello, my name is Stephanie, and I don’t like listening. Because he took me to a college football game. And then a comedy show. He introduced me to his parents. And his sister. And his roommates. Basically, all of my favorite things. Before I finally resorted to the most grueling 48 hours of silent treatment in an effort to get more clarity on (yet another) romance that was quickly spiraling deep into the abyss of friend-zone-dom. Little did I know that this guy would proceed to use every form of modern-day communication to contact me in those 48 hours: voicemail, text message, Instagram DM, SnapChat, email. You name it.

Because I care. Because I love so damn hard. Because I don’t want a lifetime with a boyfriend. I want a lifetime with a best friend (just, please, touch me as much as humanly possible). Because we could talk. Really talk. Even when it was hard. And, because he opened himself up to being vulnerable. He chose to articulate his own thought processes and feelings – even when the answer had the potential to be contrary to my heart’s desires, which I could see that he desperately wanted to protect (as my friend). So, I made a choice. I chose to hold that soft space for him. I wanted to give his words a place to breathe. Without a backlash. Or an ultimatum. Or a time clock that was merely a product of society’s manipulation (mind you, I don’t pay much attention to clocks these days). Because, at the end of the day, I’d want someone that I care about to hold that soft space for me.

So, back to boundaries. And, the crux. He spoke his truth. He exposed himself. He was honest. But, that honesty as it pertained to me was nothing short of confusing. So, then, I inserted my own truth. I evaluated the weakness of my own self while standing inside a vacuum of both ultimate confusion and vulnerability, and the odds of a heartbreak seemed altogether inevitable.

Because, when or how or why does one mysteriously wake up with the answers to combat that confusion? Does it happen one morning when your teeth are unbrushed and your hair is a mess and you roll over and see the shape of her neck nestled into the pillow on the other side of your bed? Or, is it when she’s giving the dogs a bath? Or plating your dinner? Or when you’re sitting on the couch just three feet away from her at 11:07pm and watching episode three of “Ozark” with her eyes glued to the screen? Or, does it happen when she’s gone? When you’re yearning for her laugh in your passenger seat? Or her hug when you walk through your front door? Or the way she looks at you like you’re the only one in the world? Does it happen fast? Or, slow? And, then, is there permanence in the knowing?

And, here I am, doing it again. I’m justifying my need to stay, my innate desire to give to one person, inside an experience that could quite possibly be beckoning me to leave. I’m hearing that he is not ready, and yet I’m taking his actions at my own evaluation and creating a story that maybe he is, in fact, ready. I’m hoping that I know more about him than he knows about himself. I’m hoping that if I do just one more thing right, then the confusion will dissipate, that he will see me like I see him, that we can live inside of that picturesque movie romance that is (clearly) still living just outside of my fingertips.

Sidebar: I want to be clear that I have the utmost respect for him and for his honesty. I’m not going into a lot of detail on his end here because, really, this isn’t about him. It’s about me. Plus, I don’t have a right to articulate his story. I only have the right to articulate mine. But, the hyperbolic crashing of our two worlds has (obviously) raised in me a lot of probing questions about my own personal development.

Because, wow. I just voluntarily sacrificed everything I want in this life on a hope. I lowered my bar to justify someone else’s state of unknowing. I also arrogantly decided that I know him better than he knows him. Hi. Stephanie, here. Present. This is me. Not setting boundaries. Because I wanted it to be right. Even if it was wrong (in a romantic sense). And, dammit, Stephanie, have you learned nothing?

Because I have stayed in far too many relationships to date because I thought that I could force an exponential shift in being. I thought that if I just did more, then I would have everything that I wanted. I thought it was about effort (because, athlete).

And, what I now believe about love is that it is not about it being hard. It is about it being easy. It is about finding someone who helps to carry the weight of the world when you are too tired or weak or scared to carry it yourself. It’s about falling into the person who sees your heart without its skin, an acknowledgement that you are more than just a body. The person who will jokingly roll his eyes and slyly smile when you ask him to push you on the cart in the grocery store. The person who shares your equal hatred for top sheets. The person who extends his hand in a crowded room in the effort to lead and never lose you.

Hear me. Relationship is work. Doing life with someone on such a grandiose scale as every day, that most certainly has its fair share of hardship. But, love. Love is not hard. We make love hard by forcing relationship.

I repeat, we make love hard by forcing relationship.

So, hi, hello, Stephanie here. Struggling to set boundaries. Because, it feels good to have a person. But, it also feels good to effortlessly fall into that space of togetherness. Without having to convince another soul that you are right. Without relying on effort as the barometer of your worth. So, yep, I’m still here. Still committed to my voice. Still committed to my story. Still committed to the belief that the right people for us exist in our lives because of our mutual choice for one another. And, that choice means we are ready and willing to do the work, the relationship work, the boundary work. Because, love, love is the easy part.

Stephanie Kemp
Stephanie is a road warrior, adventure seeker, and brand builder. She grew up in the mountains of Colorado and after spending nearly a decade between the PNW and the east coast, she’s proud to once again be calling Colorado home. Well, home for now. Stephanie recently bought an Airstream with the intention of living a more minimalistic and nomadic lifestyle. After logging over 20k miles in her car last year, chasing rock faces in the summer and powder days in the winter, she realized that life could be a hell of a lot simpler if she could carry her house with her on these adventures. In 2017, she started her own marketing agency, Sleigh Creative, to take control of her freedom. As a freelance creative director and brand strategist, she spends a lot of days playing and even more nights working. In all things, be it work or play, she seeks to inspire people to the life of never settling. You can follow along with her journey on Instagram, @by.stephanieleigh, and through her self-titled personal blog.
Tagged: Air streamerboundariesrelationshipSilver liningsthe finest line
OnFortCollins.com is a locally-owned and operated directory and information guide for Fort Collins Colorado
Discover the best of Fort Collins shopping, restaurants, night life, breweries, events, business, outdoors, fun, local life, real estate, transportation, jobs, and schools.
Looking for what to do in Fort Collins? OnFortCollins.com has columnists, and bloggers to keep you up to date on the best of Fort Collins, Colorado.