About a month ago, my hometown caught on fire. I exaggerate you not that Basalt, Colorado is beyond blessed to still be standing (and may all the Lake Christine firefighters have a special place in heaven for their tireless efforts). 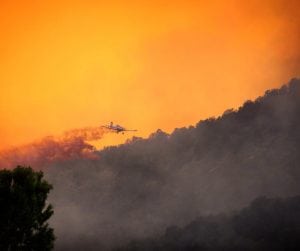 It’s a rather surreal feeling to hear that some of your dearest friends are evacuating their homes in a place that you spent your entire childhood. It’s nearly impossible to not transplant yourself into such a scenario, and it was in this state of empathy that I had a very cathartic realization about my past attachment, and current detachment, from things.

For many years, I used possessions to feel something. I was in a toxic marriage in which I felt anything but loved. Physical touch was a distant part of our relationship. My ex-husband was more concerned about asserting his dominance over me than participating in a symbiotic partnership. But, money, we had money. So, buying things felt good. I could run my fingers over those things and know that they were real. I could put on new clothes and get compliments for those things being new.

My love language is “words of affirmation,” so on a very basic level, I needed those compliments. They were my life jacket in an abyss of deep, dark waters. As a single person, I spent the last three years in constant introspection around what it means to love and to be loved, both for humanity and for myself. I’ve come to a stark realization about the weight that I naturally put on words. I do not take them lightly. If you tell me something, I believe it to the core of my being, and while I’m terrible at accepting compliments, there is something about a compliment that tattoos itself into the soft spaces of my soul. So, words, yes, they are my kryptonite.

Hear me, future significant other. Don’t buy me flowers. They die (seriously, still evaluating how flowers are a sound financial investment). But, tell me I’m smart and pretty, and I’ll be wrapped around your finger.

Some backstory. I spent my 20’s as a high school English teacher and varsity basketball coach, which is (sadly) a rather thankless job. I cannot articulate in enough words what this career did for my personal growth, and I have endless respect for those who are committed to this work, but I was dying. I loved every single kid that ever graced my classroom (okay, there are a couple that I might use a different verb to describe), but even amidst that love, I was becoming a hollow version of myself. So, somewhere on the brink of 30-years-old, I realized that I needed to make choices to initiate change or succumb to living – and eventually dying – inside of my emptiness.

Ultimately, I gained the confidence to leave both the unfulfilling career and marriage (in that order). But, I held on to my love for things through both separations. Because, things give your fingers something to feel when your body is aching to believe that you are not the only person on the planet wallowing in heartbreak.

To be honest, it’s been almost like an out-of-body experience to witness both my obsession with and separation from materialism.

When I met my (now) ex-husband, he repeatedly told me how I didn’t have enough style, that he would never want to be with someone who wasn’t into fashion. Yes, that should have been my first clue to abort. But, abort I did not. In my insecurity, I repeatedly believed that my worth was attached to those words. So, I tried endlessly to do enough to obtain this arbitrary status, never really understanding when the finish line would arrive, if at all. But, in the pursuit, I acquired things. So. Many. Things. And, without even realizing it, there I was, sitting in my stuff. Stuff that was making me feel worthy of being loved.

When I found myself living alone again, I slowly started to feel suffocated by my things. The more confident I became in my ability to stand alone, the less I needed a closet full of clothes to masque my lack of confidence.

When I moved from Boise to Sun Valley last winter, I naturally left all of my furniture behind, but I can still pinpoint a very strong connection to certain things to which I attached the pronoun “my.” When I made the decision to move into the Airstream, I became less interested in those things. And, three months into living in the Airstream, I now notice an 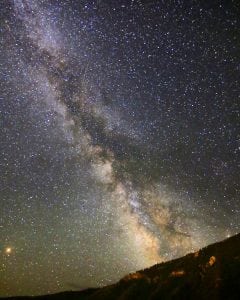 even deeper lack of interest. In the process of my initial downsize, I distinctly remember wanting to keep all of my clothes and justifying a reason for nearly every piece of apparel. Yet, I currently wear the same outfits on repeat every week (and, quite frankly, I give zero fucks). Don’t get me wrong, I’m a total snob when it comes to my technical gear, and I really do have a reason for nearly every item that I own in that regard, but when it comes to my everyday life, give me ten pairs of black high-waisted lululemon leggings, some tank tops, and a couple hoodies, and I’m golden.

Fast forward a few more months to the end of July, and when I heard that the Lake Christine Fire was endangering so many people and so many places that I love, I instinctively thought about what so many of my friends were going through who still call this place home. I wondered what it would be like for someone to have a finite amount of time to gather his or her most important material things, load them in the car, and evacuate to safety.

Then, it hit me. This is my current state of existence. I have managed to narrow down the most important things I own into the backseat of my Yukon (hello, snowboard gear) and 100 square feet of an aluminum travel trailer. Yes, I did it out of choice and without danger looming in the background. And, yes, I humbly admit that I had ample time to evaluate these decisions. In no way can I begin to resonate with the fear that one would feel in a scenario defined by the words “emergency evacuation,” and I’ve had enough conversations with my hometown friends to realize that the terror is truly incomprehensible.

But, nonetheless, here I am. On the other side of my own relative emergency evacuation. Stripped down. With a closet that is probably one-sixteenth the size of my closet from five years ago. And more joy than I thought could possibly fit inside of one human heart.

What I was able to take away from this small sliver of consciousness was my detachment from something, or some things, that used to numb my reality. I had allowed myself to get to a place where I looked in the mirror only to see a shell of my own skin. Then, one morning I woke up to the most authentic version of my being. At some undefined moment. Without any premeditated goal. Unbeknownst to myself. Somewhere along the way, I had changed. Again. Or, back. And, the momentary self-awareness to my transformation allowed my spirit to exhale. My clenched hands relaxed. My shoulders softened. I realized that I could lose everything and feel like nothing less of a human. I, Stephanie Leigh Kemp, didn’t need any of that stuff anymore.

Things. They can be replaced. I love what I have and am lucky to have it, but I am detached from it carrying significant worth.

Extraordinary life experiences. Deep human connections. Honest words spoken from truthful tongues. These are the epicenter of the world that I want to create for myself.

Stephanie Kemp
Stephanie is a road warrior, adventure seeker, and brand builder. She grew up in the mountains of Colorado and after spending nearly a decade between the PNW and the east coast, she’s proud to once again be calling Colorado home. Well, home for now. Stephanie recently bought an Airstream with the intention of living a more minimalistic and nomadic lifestyle. After logging over 20k miles in her car last year, chasing rock faces in the summer and powder days in the winter, she realized that life could be a hell of a lot simpler if she could carry her house with her on these adventures. In 2017, she started her own marketing agency, Sleigh Creative, to take control of her freedom. As a freelance creative director and brand strategist, she spends a lot of days playing and even more nights working. In all things, be it work or play, she seeks to inspire people to the life of never settling. You can follow along with her journey on Instagram, @by.stephanieleigh, and through her self-titled personal blog.
Tagged: basaltColoradoEmergencyevacuationfirefightersforest fireintangiblelake Christinematerialstangiblethings
OnFortCollins.com is a locally-owned and operated directory and information guide for Fort Collins Colorado
Discover the best of Fort Collins shopping, restaurants, night life, breweries, events, business, outdoors, fun, local life, real estate, transportation, jobs, and schools.
Looking for what to do in Fort Collins? OnFortCollins.com has columnists, and bloggers to keep you up to date on the best of Fort Collins, Colorado.