8-Year-Old Recovering After Fighting Off Mountain Lion With Stick 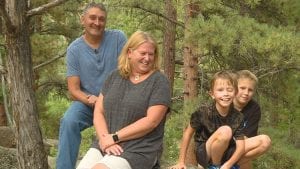 Pike Carlson, an 8-year-old Colorado boy, was caught in a dangerous situation last month when heading to a neighbors house when a 65 pound mountain lion suddenly pounced on him and began mauling him.

“I was just punching, trying to grab anything that I can, like a stick,” Pike told KUSA-TV. “I did find a stick and I tried to get it in the eye, but soon the stick snapped.”

The boy’s father saw the attack and immediately rushed to his side even though he only had a pocket knife with him. However, just him approaching was enough to scare off the lion.

The boy’s skull, jaw and orbital bone were cracked, and the boy needed more than 60 staples. He also will have surgery on his eyelid.

Kaylee Huntley
Kaylee was raised (but not *technically* born) in Colorado. She graduated from Regis University with a bachelor of arts in English. During her time at Regis she worked as a teaching assistant in a freshman classroom setting and in the writing center helping students on a variety of topics. While there, she discovered Cura Personalis, or care for the entire person, leading to her love of feminism and desire for equal rights for all. Kaylee spends her time reading, writing, and debating.
Tagged: mountain lionmountain lion attackpike carlson
OnFortCollins.com is a locally-owned and operated directory and information guide for Fort Collins Colorado
Discover the best of Fort Collins shopping, restaurants, night life, breweries, events, business, outdoors, fun, local life, real estate, transportation, jobs, and schools.
Looking for what to do in Fort Collins? OnFortCollins.com has columnists, and bloggers to keep you up to date on the best of Fort Collins, Colorado.