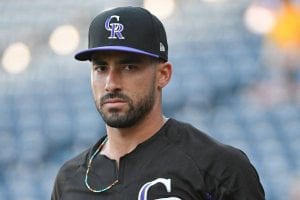 The Colorado Rockies have put on an offensive show lately.  The team scored 48 runs in a recent four-game series against the San Diego Padres as Charlie Blackmon set a modern-day record with 15 hits, Nolan Arenado is hitting .317 with 19 HRs and 62 RBIs, Trevor Story has 17 dingers, David Dahl is hitting .320, and Daniel Murphy has knocked in 40 runs.

Generally, this is the part of the article in which I give praise to many, then ridicule Ian Desmond.  I’ve been rough on Desmond, and rightly so.  Signed to five-year/$70 million contract back in 2017, Desmond has been nothing short of awful since he put on the purple uniform.

But as I sit here today, Desmond is hitting .279 with 11 HRs, 41 RBIs, and 20 doubles.  He’s been the sparkplug to the Rockies offensive machine, and I owe him a well-deserved apology.

Here are the top ten insults I’ve written about Ian Desmond, and for this, I am sorry. 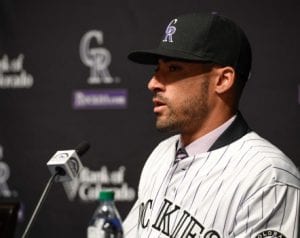 Now, I’m not saying that Desmond will ever be worth the ridiculous contract they gave him.  And I’m not saying that we wouldn’t trade Desmond and his contract for anyone willing to pay him, any phone that rings, any six-pack of beer offered.  But at .279 and 41 RBIs, Desmond has finally earned his paycheck, the respect of the fans, and my apologies.

Alan Tapley
Alan Tapley is an educator, author, and blogger who has lived just outside of Boulder for the last twenty years.  His published work includes two novels, two children’s books, a series of cartoons in the Minneapolis Star-Tribune, and multiple sports related articles. His love for family and the state of Colorado is only matched by one thing, his passion for sports.  The first baseball game he ever attended was at Wrigley Field, before there were lights.  At the final Bronco game at the old Mile High, he allegedly cut out a piece of his seat in the South stands.  But regardless of being here for the Avalanche’s last Stanley Cup, the Rockies only World Series appearance, and all the Broncos’ Super Bowl Victories, his wife never fails to remind him that he wasn’t at the University of Colorado in 1990, like she was.  The year the Buffs football team won the National Championship
Tagged: Charlie BlackmonColorado RockiesDaniel MurphyDavid DahlIan DesmondMLBNolan Arenado
OnFortCollins.com is a locally-owned and operated directory and information guide for Fort Collins Colorado
Discover the best of Fort Collins shopping, restaurants, night life, breweries, events, business, outdoors, fun, local life, real estate, transportation, jobs, and schools.
Looking for what to do in Fort Collins? OnFortCollins.com has columnists, and bloggers to keep you up to date on the best of Fort Collins, Colorado.